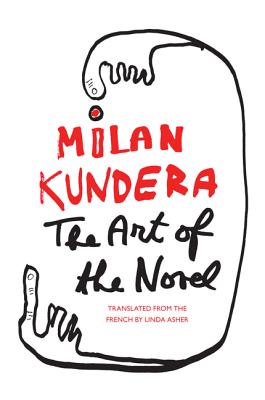 “Lucid, detached, and epigrammatic …The book has its author’s familiar swiftness and variety of attack and his elegant, provocative irony.”— The New Yorker

"Every novelist's work contains an implicit vision of the history of the novel, an idea of what the novel is. I have tried to express the idea of the novel that is inherent in my own novels." — Milan Kundera

Kundera examines the evolution, construction, and essence of the novel as an art form through the lens of his own work and through the work of such important and diverse figures as Rabelais, Cervantes, Sterne, Diderot, Flaubert, Tolstoy, Musil, Kafka, and perhaps the least known of all the great novelists of our time, Hermann Broch.

As witty, original, and far-reaching as his unique fiction, Kundera offers his views on the role of historical events in fiction, the meaning of action, the creation of character in the postpsychological novel and his reflections on the state of the modern European novel.

Milan Kundera is the author of the novels The Joke, Farewell Waltz, Life Is Elsewhere, The Book of Laughter and Forgetting, The Unbearable Lightness of Being, and Immortality, and the short-story collection Laughable Loves—all originally written in Czech. His most recent novels Slowness, Identity, and Ignorance, as well as his nonfiction works The Art of the Novel, Testaments Betrayed, The Curtain, and Encounter, were originally written in French.

“Lucid, detached, and epigrammatic …The book has its author’s familiar swiftness and variety of attack and his elegant, provocative irony.”
— The New Yorker

“Incites us to reflect on fiction and philosophy, knowledge and truth, and brilliantly illustrates the art of the essay.”
— The New Republic

“Kundera writes with wisdom and force.”
— The Village Voice