To Rule the Waves: How the British Navy Shaped the Modern World (Paperback) 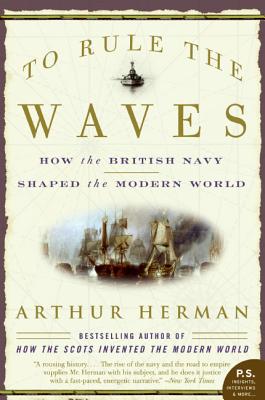 To Rule the Waves: How the British Navy Shaped the Modern World (Paperback)

To Rule the Waves tells the extraordinary story of how the British Royal Navy allowed one nation to rise to a level of power unprecedented in history. From the navy's beginnings under Henry VIII to the age of computer warfare and special ops, historian Arthur Herman tells the spellbinding tale of great battles at sea, heroic sailors, violent conflict, and personal tragedy -- of the way one mighty institution forged a nation, an empire, and a new world.

This P.S. edition features an extra 16 pages of insights into the book, including author interviews, recommended reading, and more.

Arthur Herman is the author of How the Scots Invented the Modern World as well as The Idea of Decline in Western History and Joseph McCarthy. He has been a professor of history at Georgetown University, Catholic University, George Mason University, and the University of the South.

“A cracking good read and a model of intelligent concision. To Rule the Waves is likely to become the standard one-volume history of the Royal Navy. From the epic sailing battles of the 16th century to the coda of the Falkland Islands War in 1982, from Hawkins and Drake to Nelson and Fisher, all the navy’s great episodes and characters are brought alive for the reader. . . . It also places the Royal Navy in its political context, showing how it created one of the first global systems, one that still influences the world today.”
— Max Boot, author of The Savage Wars of Peace

“A riveting story of some 400 years of British naval mastery—the great battles, the courageous sailors, and the often fanatical admirals—that serves as an especially timely reminder that national purpose and unity, coupled with a sense of self-sacrifice and heritage, really do win wars and keep the peace.”
— Victor Davis Hanson, author of Carnage and Culture, and Senior Fellow at the Hoover Institution, Stanford University

“A splendid history of the British Royal Navy. . . . Herman writes extremely well. . . . Good one-volume histories of one of the world’s most vital fighting forces appear rarely; this one should rule for a while to come.”
— Publishers Weekly

“A stirring account of the origins and evolution of the British navy. . . . This is an exciting chronicle filled with colorful characters and enthralling adventures.”
— Booklist

“Arthur Herman’s excellent history combines thrilling accounts of battles like those brought to the big screen in ‘Master and Commander,’ with a terrific strategic analysis. He reminds us that the sea unites distant and far away lands.”
— New York Post

“A rousing history. . . . The rise of the navy and the road to empire supplies Mr. Herman with his subject, and he does it justice [with] a fast-paced, energetic narrative.”
— New York Times