There's Nothing in the Middle of the Road but Yellow Stripes and Dead Armadillos: A Work of Political Subversion (Paperback) 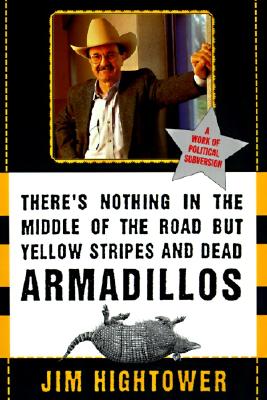 There's Nothing in the Middle of the Road but Yellow Stripes and Dead Armadillos: A Work of Political Subversion (Paperback)


We can usually get this book in 3 to 7 days, except during a pandemic. We are doing our best
Revised, and with a New Introduction by the Author "I am an agitator, and an agitator is the center post in a washing machine that gets the dirt out."
--Jim Hightower

Hightower is mad as hell and he's not going to take it anymore! He's also funny as hell, and in this book he focuses his sharp Texas wit, populist passion, and native smarts on America's political, economic, scientific, and media establishments. In There's Nothing in the Middle of the Road But Yellow Stripes and Dead Armadillos, Hightower shows not only what's wrong, but also how to fix it, offering specific solutions and calling for a new political movement of working families and the poor to "take America back from the bankers and bosses, the big shots and bastards."

"If you don't read another book about what's wrong with this country for the rest of your life, read this one. I think it's the best and most important book about out public life I've read in years."
--Molly Ivins, author of Molly Ivins Can't Say That, Can She?

"Listen to Jim Hightower. His is a two-fisted, rambunctious voice unafraid to speak truth to power, eloquently and clearly...He's one of the best."
--Studs Terkel

Jim Hightower is a political spark plug who has spent 25 years battling Washington and Wall Street on behalf of working families, consumers, environmentalists, small businesses and just plain folk. He confesses that he has been a practicing politician, serving two terms as Texas' elected agriculture commisioner. In addition to his popular radio broadcasts, his speechifying and all-around agitating, he publishes the biweekly political newsletter The Hightower Lowdown. His previous bestseller was There's Nothing in the Middle of the Road but Yellow Stripes and Dead Armadillos.