Down the Great Unknown: John Wesley Powell's 1869 Journey of Discovery and Tragedy Through the Grand Canyon (Paperback) 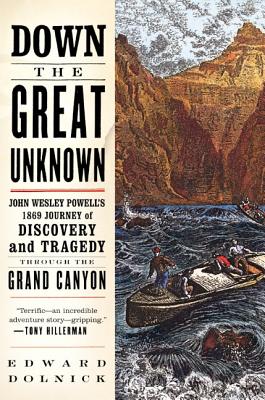 Down the Great Unknown: John Wesley Powell's 1869 Journey of Discovery and Tragedy Through the Grand Canyon (Paperback)

Drawing on rarely examined diaries and journals, Down the Great Unknown is the first book to tell the full, dramatic story of the Powell expedition.

On May 24, 1869 a one-armed Civil War veteran, John Wesley Powell and a ragtag band of nine mountain men embarked on the last great quest in the American West. The Grand Canyon, not explored before, was as mysterious as Atlantis—and as perilous. The ten men set out from Green River Station, Wyoming Territory down the Colorado in four wooden rowboats. Ninety-nine days later, six half-starved wretches came ashore near Callville, Arizona.

Lewis and Clark opened the West in 1803, six decades later Powell and his scruffy band aimed to resolve the West’s last mystery. A brilliant narrative, a thrilling journey, a cast of memorable heroes—all these mark Down the Great Unknown, the true story of the last epic adventure on American soil.

Edward Dolnick is the author of Down the Great Unknown, The Forger’s Spell, and the Edgar Award-winning The Rescue Artist. A former chief science writer at the Boston Globe, he lives with his wife near Washington, D.C.

“Written with authority and zeal, this rich narrative is popular history at its best.” — Kirkus Reviews (starred review)

“Edward Dolnick’s Down the Great Unknown is both good history and a successful adventure yarn.” — Harper’s Magazine