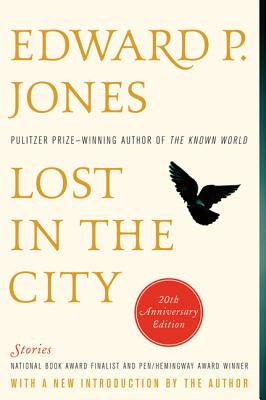 From the Pulitzer Prize winning author of The Known World

“Original and arresting….[Jones’s] stories will touch chords of empathy and recognition in all readers.”
—Washington Post

“These 14 stories of African-American life…affirm humanity as only good literature can.”
—Los Angeles Times

A magnificent collection of short fiction focusing on the lives of African-American men and women in Washington, D.C., Lost in the City is the book that first brought author Edward P. Jones to national attention. Winner of the Pulitzer Prize, the National Book Critics Circle Award, and numerous other honors for his novel The Known World, Jones made his literary debut with these powerful tales of ordinary people who live in the shadows in this metropolis of great monuments and rich history. Lost in the City received the Pen/Hemingway Award for Best First Fiction and was a National Book Award Finalist. This beautiful 20th Anniversary Edition features a new introduction by the author, and is a wonderful companion piece to Jones’s masterful novel and his second acclaimed collection of stories, All Aunt Hagar’s Children.

Edward P. Jones, the New York Times bestselling author, has been awarded the Pulitzer Prize, for fiction, the National Book Critics Circle award, the International IMPAC Dublin Literary Award, and the Lannan Literary Award for The Known World; he also received a MacArthur Fellowship in 2004. His first collection of stories, Lost in the City, won the PEN/Hemingway Award and was short listed for the National Book Award. His second collection, All Aunt Hagar’s Children, was a finalist for the Pen/Faulkner Award. He has been an instructor of fiction writing at a range of universities, including Princeton. He lives in Washington, D.C.

“Original and arresting. . . . [Jones’s] stories will touch chords of empathy and recognition in all readers.” — Jonathan Yardley, Washington Post

“Edward P. Jones has a commanding voice. His collection of stories is arresting.” — Terry McMillan, author of Waiting to Exhale

“Although these experiences will be unfamiliar to many readers, Jones instills humanity in his characters and stories.” — Library Journal