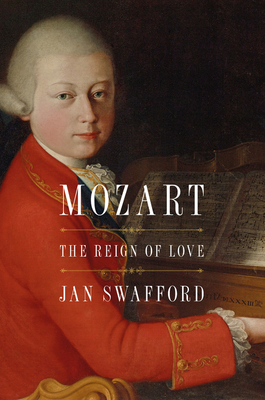 From the acclaimed composer and biographer Jan Swafford comes the definitive biography of one of the most lauded musical geniuses in history, Wolfgang Amadeus Mozart.

At the earliest ages it was apparent that Wolfgang Mozart’s singular imagination was at work in every direction. He hated to be bored and hated to be idle, and through his life he responded to these threats with a repertoire of antidotes mental and physical. Whether in his rabidly obscene mode or not, Mozart was always hilarious. He went at every piece of his life, and perhaps most notably his social life, with tremendous gusto. His circle of friends and patrons was wide, encompassing anyone who appealed to his boundless appetites for music and all things pleasurable and fun.

Mozart was known to be an inexplicable force of nature who could rise from a luminous improvisation at the keyboard to a leap over the furniture. He was forever drumming on things, tapping his feet, jabbering away, but who could grasp your hand and look at you with a profound, searching, and melancholy look in his blue eyes. Even in company there was often an air about Mozart of being not quite there. It was as if he lived onstage and off simultaneously, a character in life’s tragicomedy but also outside of it watching, studying, gathering material for the fabric of his art.

Like Jan Swafford’s biographies Beethoven and Johannes Brahms, Mozart is the complete exhumation of a genius in his life and ours: a man who would enrich the world with his talent for centuries to come and who would immeasurably shape classical music. As Swafford reveals, it’s nearly impossible to understand classical music’s origins and indeed its evolutions, as well as the Baroque period, without studying the man himself.

Jan Swafford is an American composer and author. He earned his bachelor of arts magna cum laude from Harvard College and his DMA in composition from the Yale School of Music. His music has been widely played by ensembles, including the symphonies of St. Louis, Indianapolis, and the Dutch Radio. He is the author of biographies of Ives, Brahms, and Beethoven. His many honors include an NEA Composer Grant and the Deems Taylor Award for online writing on music, which he won for his essays in Slate. He is a longtime program writer and preconcert lecturer for the Boston Symphony Orchestra, and has written notes and essays for the orchestras of Cleveland, Chicago, San Francisco, Detroit, and Toronto. Among his liner notes for  recordings are those for DGG’s anniversary release of  Beethoven’s nine symphonies by the Vienna Philharmonic.

“Mr. Swafford delights in repeating [stories of Mozart]—it’s one of the pleasures of this comprehensive and engaging biography.... With the eye of an omniscient novelist, Mr. Swafford tells Mozart’s story looking both forward and back, knowing too well how it will end… When he’s describing music, Mr. Swafford the novelist often becomes Mr. Swafford the poet, finding the impeccable image or unforgettable turn of phrase… [Mozart is a] conversation he so irresistibly invites us to join.”
— Wall Street Journal

"This is an excellent book on Mozart for both musicians and the general reader. The story is told in a lively, knowing style, without written-out musical examples but shot through with unfailingly erudite and impassioned discussion of the composer’s work."
— Washington Post

“It is a great pleasure to read about Mozart as a working composer in a narrative written by a working composer....Jan Swafford, an author whose music has been performed by the symphonies in St. Louis and Indianapolis, is our guide into the composing process, aided by a dexterous use of Mozart’s  correspondence and a deep knowledge of how music came about during the 18th century…The result is a biography that has an immediacy, a wholly thrilling ‘you are there’ impact.”
— San Francisco Chronicle

“The book goes well beyond setting the historical record straight, however. It is an utterly comprehensive look at Mozart's life, as well as an exhaustive reference to his music. Swafford, who has also written biographies of Beethoven, Charles Ives and Brahms, is a composer first, and his keen understanding of music is his greatest strength as a biographer.”
— Minneapolis Star Tribune

"In this masterfully written biography, Jan Swafford not only presents a richly detailed portrait of one of the greatest classical composers of all time, but debunks many of the myths surrounding the momentous and all-too-short life of Wolfgang Amadeus Mozart. The author, who is a composer, brings his insight to bear on his subject."
— Christian Science Monitor

"Composer and biographer Swafford brings expertise and insight to bear on a comprehensive, animated life of Wolfgang Amadeus Mozart.. deftly [capturing Mozart’s] brilliance in a challenging narrative that is sure to thrill classical music fans… An admiring, authoritative biography.”
— Kirkus Reviews

"If tackling an 832-page biography of anybody seems daunting for the general reader, Swafford makes it almost effortless with Mozart, animating his genius....and, as a composer himself, offering an astute yet thoroughly approachable analysis, almost piece by piece, of the composer’s entire canon, lingering fittingly on the composer’s major operas....A virtually indispensable volume for the music collection."

"The copious detail will appeal to musicologists, while the flowing, conversational style will draw in general readers who’d like to learn more about the composer. Heartily recommended to everyone with an interest in the subject."
— Library Journal (starred review)