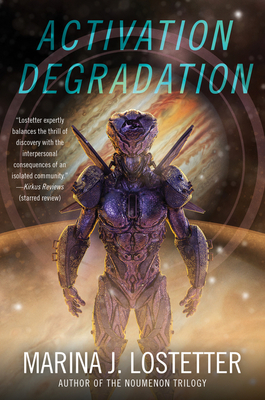 When Unit Four—a biological soft robot built and stored high above the Jovian atmosphere—is activated for the first time, it’s in crisis mode. Aliens are attacking the Helium-3 mine it was created to oversee, and now its sole purpose is to defend Earth’s largest energy resource from the invaders in ship-to-ship combat.

There are files in its databanks it can’t account for, unusual chemical combinations roaring through its pipes, and the primers it possesses on the aliens are suspiciously sparse. The robot is under orders to seek and destroy. That’s all it knows.

According to its handler, that’s all it needs to know.

Determined to fulfill its directives, Unit Four launches its ship and goes on the attack, but it has no idea it’s about to get caught in a downward spiral of misinformation, reprograming, and interstellar conflict.

Most robots are simple tools. Unit Four is well on its way to becoming something more....

Marina J. Lostetter’s original short fiction has appeared in Lightspeed’s Women Destroy Science Fiction! and InterGalactic Medicine Show, among other publications. Originally from Oregon, she now lives in Arkansas with her husband, Alex. Marina enjoys globe-trotting, board games, and all things art-related.

“Noumenon...offers a dreamlike exploration of evolving societies and the many ways humans can control, fight and love each other.” — Washington Post

“Soaked in the spirit of classic SF sensawunda, this ambitious debut explores the complexities of such an immense voyage, which pile up in surprising ways as the clones get further from the familiar.” — B&N Sci-Fi & Fantasy Blog on Noumenon

“Noumenon is a grand interstellar quest that marries intimate detail with the sweep of social change and discovery across generations.  I was enthralled.”

“[An] ambitious and stunning debut...Lostetter handles a complex and fractured narrative masterfully, never allowing her novel to become confusing or unconvincing. There are no easy answers to the book’s questions, but the lingering sense of wonder and discovery thoroughly justifies its title.” — Publishers Weekly (starred review) on Noumenon

“Lostetter expertly balances the thrill of discovery with the interpersonal consequences of an isolated community. The tools of speculative fiction are deployed with heart-rending attention to emotional reality in this enthralling odyssey. A striking adventure story that could hold a galaxy in its scope.” — Kirkus Reviews (starred review) on Noumenon

"Adult and mature YA readers who enjoy classic space operas of interplanetary travel and contact with alien life-forms should find this appealing.” — Library Journal

“The ambitious and effective sequel to Noumenon […] Lostetter remains at the forefront of innovation in hard science fiction.” — Publishers Weekly (starred review)

“[An] ambitious and stunning debut...Lostetter handles a complex and fractured narrative masterfully, never allowing her novel to become confusing or unconvincing. There are no easy answers to the book’s questions, but the lingering sense of wonder and discovery thoroughly justifies its title.” — Publishers Weekly (starred review)

“A novel that was anything less than stellar would be an especially disappointing follow-up to the brilliant Noumenon, but Lostetter has achieved that and much more. [...] Sci-fi action and adventure held together by universally human themes; this is the genre at its very best.” — Kirkus Reviews (starred review)

“A tight, compelling sequel [...] Lostetter’s characters persevere and evolve, creating a compelling portrait that feels, at its heart, ultimately both human and galactic in scope.” — Strang Horizons

“Talk about a stunning debut! Lostetter’s first full-length novel is an ambitious feat of worldbuilding that will remind you of classic sci-fi favorites.” — RT Book Reviews

“Travel to the remotest reaches of deep space in this wondrous follow-up to the acclaimed Noumenon—a tale of exploration, adventure, science, and humanity with the sweep and intelligence of the works of Arthur C. Clarke, Neal Stephenson, and Octavia Butler.” — Open Book Society