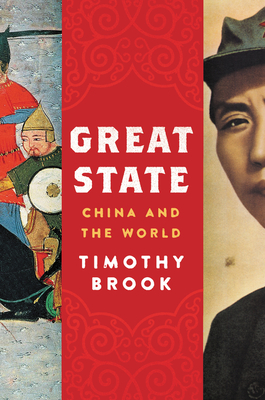 The world-renowned scholar and author of Vermeer’s Hat does for China what Mary Beard did for Rome in SPQR: Timothy Brook analyzes the last eight centuries of China’s relationship with the world in this magnificent history that brings together accounts from civil servants, horse traders, spiritual leaders, explorers, pirates, emperors, migrant workers, invaders, visionaries, and traitors—creating a multifaceted portrait of this highly misunderstood nation.

China is one of the oldest states in the world. It achieved its approximate current borders with the Ascendancy of the Yuan dynasty in the thirteenth century, and despite the passing of one Imperial dynasty to the next, has maintained them for the eight centuries since. China remained China through the Ming, the Qing, the Republic, the Occupation, and Communism. But despite the desires of some of the most powerful people in the Great State through the ages, China has never been alone in the world. It has had to contend with invaders as well as foreign traders and imperialists. Its rulers for the majority of the last eight centuries have not been Chinese.

China became a mega-state not by conquering others, Timothy Brook contends, but rather by being conquered by others and then claiming right of succession to the empires of those Great States. What the Mongols and Manchu ruling families wrought, the Chinese ruling families of the Ming, the Republic, and the People’s Republic, have perpetuated. Yet a contemporary Chinese idea of a ‘fatherland’ that is, and always has been, completely and naturally Chinese persists. Brook argues that China, like everywhere, is the outcome of history, and like every state, rests on its capacities to conquer and suppress.

In The Great State, Brook examines China’s relationship with the world at large for the first time, from the Yuan through to the present, by following the stories of ordinary and extraordinary people navigating the spaces where China met, and continues to meet, the world.

"An ingenious look at an often misunderstood country."
— Kirkus Reviews

“Historical resonance sounds in every country and culture largely because humans are preordained by their natures to react in certain ways to similar circumstances. But in China, argues Timothy Brook in his excellent new book Great State, there is a crucial extra dimension. The power of this book lies partly in the fact that Brook does not overstate his case. While he does not seek to claim that China’s current actions are prefigured by the past, an attentive reader cannot fail to notice extraordinary parallels.” —Financial Times
— Financial Times

“A dizzying and exhilarating journey. . . . Understanding how China sees itself and how it justifies its actions is critical to understanding today’s world. Great State offers some compelling lessons for today, and for all our futures.” —New Statesman
— New Statesman