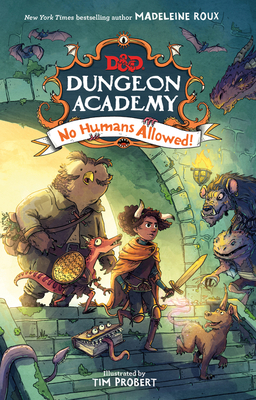 Knowing she’ll never be accepted, Zelli’s parents disguise her as a minotaur in hopes she’ll blend with the academy’s monstrous surroundings. Zelli does her work, keeps to herself, and becomes “invisible” to everyone.

While in History of Horrible Humans class, Zelli learns of the great human adventurer, Allidora Steelstrike, who oddly resembles her. Could Zelli also be a Steelstrike? Seeking answers to her true lineage, Zelli embarks on a dangerous adventure.

But she won’t be alone. A vegan owlbear, a cowardly kobold, and a shapeshifting mimic will join Zelli on her quest for truth in a world that holds no place for them. And who knows? Perhaps these monstrous misfits may discover some truths of their own . . .

Get ready for humor, heart, magic, and adventure as middle graders and beyond learn to embrace who they are, accept others' differences, and discover that making mistakes is OK—as long as you learn from them.

Madeleine Roux is the New York Times and USA Today bestselling author of the Asylum series, which has sold over a million copies worldwide. She is also the author of the House of Furies series, and several titles for adults, including Salvaged and Reclaimed. She has made contributions to Star Wars, World of Warcraft, and Dungeons & Dragons. Madeleine lives in Seattle, Washington with her partner and beloved pups.

Tim Probert is an author and illustrator whose work is made of equal parts wonder, magic, and adventure, with a dose of monsters and the occasional dinosaur. In addition to making books, he is an art director at Aardman Nathan Love, working on projects for Nickelodeon, Kellogg’s, Coca-Cola, Candy Crush, and more. Tim lives in NYC with his wife and two cats.