Goodbye Without Leaving: A Novel (Paperback) 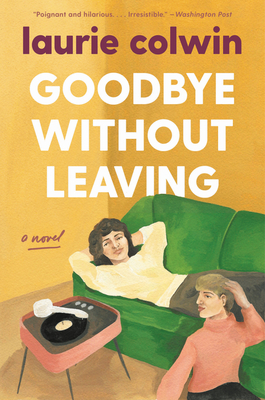 Goodbye Without Leaving: A Novel (Paperback)

One of the most beloved novels from the critically acclaimed novelist Laurie Colwin, Goodbye Without Leaving explores a woman’s attempts to reconcile her rock-and-roll past with her significantly more sedate family life as a wife and mother.

As a bored graduate student, Geraldine Coleshares is plucked from her too-tame existence when she is invited to tour as the only white backup singer for Vernon and Ruby Shakely and the Shakettes. The exciting years she spends as a Shakette are a mixed blessing, however, because when she ultimately submits to a conventional life of marriage and children, she finds herself stuck in bittersweet recollections of life on the road. As she grudgingly searches for a path toward happiness that doesn't involve a Day-Glo neon minidress, readers will be enchanted by Geraldine’s attempts to grow up, even though she’s already an adult.

Employing Colwin’s usual dry wit and candor, Goodbye Without Leaving is a classic novel from the writer hailed as “ingenious, comic, and spirited” by the Boston Globe and “a writer of originality and vision" by the San Francisco Chronicle.

Laurie Colwin is the author of five novels: Happy All the Time; Family Happiness; Goodbye Without Leaving; Shine On, Bright and Dangerous Object; and A Big Storm Knocked It Over; three collections of short stories: Passion and Affect, Another Marvelous Thing, and The Lone Pilgrim; and two collections of essays: Home Cooking and More Home Cooking. She died in 1992.

“One of this year’s funniest and most charming heroines.” — Self