We: A Novel (Paperback) 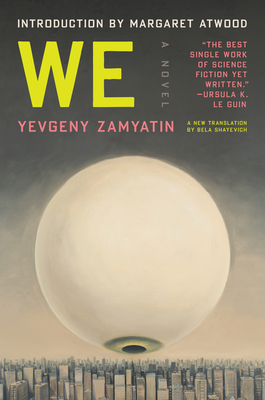 We: A Novel (Paperback)

The chilling dystopian novel that influenced George Orwell while he was writing 1984, with a new introduction by Margaret Atwood and an essay by Ursula Le Guin

In a glass-enclosed city of perfectly straight lines, ruled over by an all-powerful “Benefactor,” the citizens of the totalitarian society of OneState are regulated by spies and secret police; wear identical clothing; and are distinguished only by a number assigned to them at birth. That is, until D-503, a mathematician who dreams in numbers, makes a discovery: he has an individual soul. He can feel things. He can fall in love. And, in doing so, he begins to dangerously veer from the norms of his society, becoming embroiled in a plot to destroy OneState and liberate the city.

Set in the twenty-sixth century AD, We was the forerunner of canonical works from George Orwell and Alduous Huxley, among others. It was suppressed for more than sixty years in Russia and remains a resounding cry for individual freedom, as well as a powerful, exciting, and vivid work of science fiction that still feels relevant today. Bela Shayevich’s bold new translation breathes new life into Yevgeny Zamyatin’s seminal work and refreshes it for our current era.

Yevgeny Zamyatin was born in Russia in 1884. Arrested during the abortive 1905 revolution, he was exiled twice from St. Petersburg, then given amnesty in 1913. We, composed in 1920 and 1921, elicited attacks from party-line critics and writers. In 1929, the Russian Association of Proletarian Writers launched an all-out attack against him. Denied the right to publish his work, he requested permission to leave Russia, which Stalin granted in 1931. Zamyatin went to Paris, where he died in 1937.

Mirra Ginsburg is a distinguished translator of Russian and Yiddish works by such well-known authors as Mikhail Bulgakov, Isaac Babel, Isaac Bashevis Singer, and Fyodor Dostoevsky. Editor and translator of three anthologies of Soviet science fiction, she has also edited and translated A Soviet Heretic: Essays by Yevgeny Zamyatin, and History of Soviet Literature by Vera Alexandrova.

Margaret Atwood, whose work has been published in more than forty-five countries, is the author of more than fifty books of fiction, poetry, critical essays, and graphic novels. In addition to The Handmaid’s Tale, now an award-winning TV series, her novels include Cat’s Eye, short-listed for the 1989 Booker Prize; Alias Grace, which won the Giller Prize in Canada and the Premio Mondello in Italy; The Blind Assassin, winner of the 2000 Booker Prize; The MaddAddam Trilogy; The Heart Goes Last; and Hag-Seed. She is the recipient of numerous awards, including the Peace Prize of the German Book Trade, the Franz Kafka International Literary Prize, the PEN Center USA Lifetime Achievement Award, and the Los Angeles Times Innovator’s Award. In 2019 she was made a member of the Order of the Companions of Honour in Great Britain for services to literature and her novel The Testaments won the Booker Prize and was longlisted for The Giller Prize. She lives in Toronto.

“Though there have been numerous excellent translations of We, Shayevich’s best preserves the experimental qualities of Zamyatin’s writing. . . . With its sharp, uneven edges and chaotic originality, Zamyatin’s novel exposes the notion that human creativity is something that can be quantified, churned into an algorithm and sold as exact science for the fiction that it is.”
— New York Times Book Review

"The founding document of dystopian literature, written in the Soviet Union in 1921, comes in for a fresh translation. . . . Zamyatin’s all-seeing state is sufficiently chilling. . . . Translator Shayevich does a good job of preserving [Zamyatin's] affectless, sometimes nearly robotic prose, and the book is highly readable—and indeed should be read. A science-fiction classic, many of whose contours have become all too real." — Kirkus Reviews (starred review)