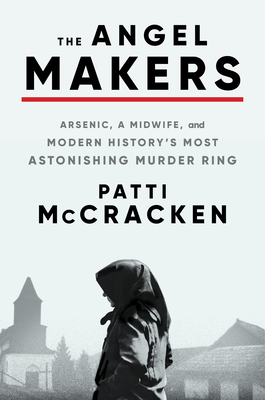 The Angel Makers is a true-crime story like no other—a 1920s midwife who may have been the century’s most prolific killer leading a murder ring of women responsible for the deaths of at least 160 men.

The horror occurred in a rustic farming enclave in modern-day Hungary. To look at the unlikely lineup of murderesses—village wives, mothers, and daughters—was to come to the shocking realization that this could have happened anywhere, and to anyone. At the center of it all was a sharp-minded village midwife, a “smiling Buddha” known as Auntie Suzy, who distilled arsenic from flypaper and distributed it to the women of Nagyrév. “Why are you bothering with him?” Auntie Suzy would ask, as she produced an arsenic-filled vial from her apron pocket. In the beginning, a great many used the deadly solution to finally be free of cruel and abusive spouses.

But as the number of dead bodies grew without consequence, the killers grew bolder. With each vial of poison emptied, a new reason surfaced to drain yet another. Some women disposed of sickly relatives. Some used arsenic as “inheritance powder” to secure land and houses. For more than fifteen years, the unlikely murderers aided death unfettered and tended to it as if it were simply another chore—spooning doses of arsenic into soup and wine, stirring it into coffee and brandy. By the time their crimes were discovered, hundreds were feared dead.

Anonymous notes brought the crimes to light in 1929. As a skillful prosecutor hungry for justice ran the investigation, newsmen from around the world—including the New York Times—poured in to cover the dramatic events as they unfolded.

The Angel Makers captures in expertly researched detail the entirety of this harrowing story, from the early murders to the final hanging—the story of one of the most sensational and astonishing murder rings in all of modern history.