Four Hours in My Lai (Paperback) 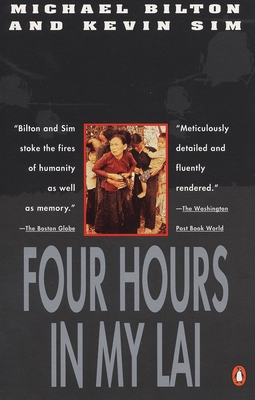 Four Hours in My Lai (Paperback)


We can usually get this book in 3 to 7 days, except during a pandemic. We are doing our best
Uncovering the secrets behind the 1968 My Lai massacre in Vietnam, this is "a brutal, cautionary tale that serves as a painful reminder of the worst that can happen in war."—Chicago Tribune.
Michael Bilton is a veteran British investigative journalist who has worked for the London Sunday Times and Yorkshire Television, a documentary film company. His documetary film Four Hours in My Lai garnered an International Emmy Award for Best Documentary. Bilton has also taught journalism at universities in Great Britain, the United States, and Denmark.

Kevin Sim is a British documentary filmmaker whose credits include Once Upon a Time in Iran, The Secret Life of the Berlin Wall, and Four Hours in My Lai, which won an International Emmy Award for Best Documentary.