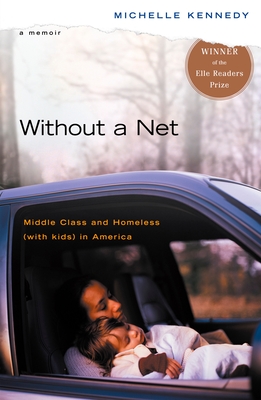 By Michelle Kennedy
$14.70
We can usually get this book in 3 to 5 days, except during a pandemic. We are doing our best

Michelle Kennedy had a typical middle class American childhood in Vermont. She attended college, interned in the U.S. Senate, married her high school sweetheart and settled in the suburbs of D.C. But the comfortable life she was building quickly fell apart. At age twenty-four Michelle was suddenly single, homeless, and living out of a car with her three small children. She waitressed night shifts while her kids slept out in the diner's parking lot. She saved her tips in the glove compartment, and set aside a few quarters every week for truck stop showers for her and the kids.

With startling humor and honesty, Kennedy describes the frustration of never having enough money for a security deposit on an apartment—but having too much to qualify for public assistance. Without A Net is a story of hope. Michelle Kennedy survives on her wits, a little luck, and a lot of courage. And in the end, she triumphs.

Michelle Kennedy’s Salon.com piece about this experience touched a nerve: E-mails and letters poured in from readers who wanted the whole story. Kennedy was recently nominated for a Pushcart Prize for her work in Brain, Child magazine. Her work has also appeared in The New York Times and the Christian Science Monitor.

Visit Michelle Kennedy on the web at http://www.mishakennedy.com

"Refreshingly candid... Without A Net shows how frighteningly easy it can be for an ordinary, non substance-abusing middle-class woman and devoted mother to find herself unable to afford a place to live." —Los Angeles Times Book Review "[Kennedy’s] sense of humor, ingenuity, and refreshing refusal to blame others for her mistakes won me over, and I quickly found myself rooting for her to succeed." —Elle Magazine

"A beautiful, heartfelt, and wonderful book." —Dorothy Allison, author of Bastard Out of Carolina