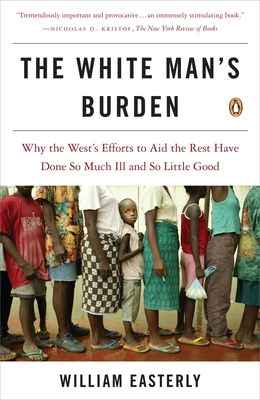 By William Easterly
$19.00
Backordered. There will likely be a delay in getting this book

In his previous book, The Elusive Quest for Growth, William Easterly criticized the utter ineffectiveness of Western organizations to mitigate global poverty, and he was promptly fired by his then-employer, the World Bank. The White Man’s Burden is his widely anticipated counterpunch—a brilliant and blistering indictment of the West’s economic policies for the world’s poor. Sometimes angry, sometimes irreverent, but always clear-eyed and rigorous, Easterly argues that we in the West need to face our own history of ineptitude and draw the proper conclusions, especially at a time when the question of our ability to transplant Western institutions has become one of the most pressing issues we face.

William Easterly is a professor of economics at New York University and a senior fellow at the Center for Global Development. He was a senior research economist at the World Bank for more than sixteen years. In addition to his academic work, he has written widely in recent years for The Washington Post, Wall Street Journal, Financial Times, Forbes, and Foreign Policy, among others. He is the author of the acclaimed book The Elusive Quest for Growth: Economists' Adventures and Misadventures in the Tropics. He has worked in many areas of the developing world, most extensively in Africa, Latin America, and Russia.

"Brilliant at diagnosing the failings of Western intervention in the Third World." -BusinessWeek