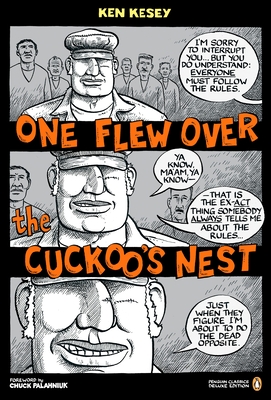 
We can usually get this book in 3 to 7 days, except during a pandemic. We are doing our best
A Penguin Classics Deluxe Edition of a counterculture classic, and the inspiration for the new Netflix original series Ratched, with a foreword by Chuck Palahniuk

Boisterous, ribald, and ultimately shattering, Ken Kesey’s 1962 novel has left an indelible mark on the literature of our time. Now in a new deluxe edition with a foreword by Chuck Palahniuk and cover by Joe Sacco, here is the unforgettable story of a mental ward and its inhabitants, especially the tyrannical Big Nurse Ratched and Randle Patrick McMurphy, the brawling, fun-loving new inmate who resolves to oppose her. We see the struggle through the eyes of Chief Bromden, the seemingly mute half-Indian patient who witnesses and understands McMurphy’s heroic attempt to do battle with the powers that keep them all imprisoned.

For more than seventy years, Penguin has been the leading publisher of classic literature in the English-speaking world. With more than 1,700 titles, Penguin Classics represents a global bookshelf of the best works throughout history and across genres and disciplines. Readers trust the series to provide authoritative texts enhanced by introductions and notes by distinguished scholars and contemporary authors, as well as up-to-date translations by award-winning translators.
Ken Kesey (1935-2001) was raised in Oregon, graduated from the University of Oregon, and later studied at Stanford University. He was the author of four novels, two children's books, and several works of nonfiction.

Chuck Palahniuk, whose latest novel is Haunted, is the author of the best-selling and critically praised novels Invisible Monsters, Diary, Lullaby, Choke, and Survivor. He lives in Washington State. Robert Faggen teaches at Claremont McKenna College.
"A work of genuine literary merit . . . What Mr. Kesey has done in his unusual novel is to transform the plight of a ward of inmates in a mental hospital into a glittering parable of good and evil."
--The New York Times Book Review

"[A] brilliant first novel . . . a strong, warm story about the nature of human good and evil . . . Keysey has made his book a roar of protest against middlebrow society's Rules and the invisible Rulers who enforce them."
--Time

"The final triumph of these men at the cost of a terrifying sacrifice should send chills down any reader's back. . . . This novel's scenes have the liveliness of a motion picture."
--The Washington Post

"An outstanding book . . . [Kesey's] characters are original and real. . . . This is a tirade against the increasing controls over man and his mind, yet the author never gets on a soap box. Nor does he forget that there is a thin line between tragedy and comedy."
--Houston Chronicle