In the Heart of the Sea: The Tragedy of the Whaleship Essex (Movie Tie-In) (Paperback) 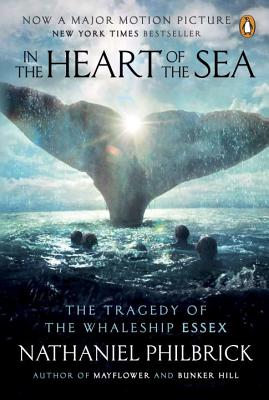 In the Heart of the Sea: The Tragedy of the Whaleship Essex (Movie Tie-In) (Paperback)


This book has been declared out of stock indefinitely, so we are unlikely to be able to get it.
From the author of In the Hurricane's Eye and Valiant Ambition, the riveting and critically acclaimed bestseller and a major motion picture starring Chris Hemsworth, directed by Ron Howard.

Chris Hemsworth, Cillian Murphy, Ben Whishaw, and Brendan Gleeson star in a film based on this National Book Award–winning account of the true events behind Moby Dick.

In 1820, the whaleship Essex was rammed and sunk by an angry sperm whale, leaving the desperate crew to drift for more than ninety days in three tiny boats. Nathaniel Philbrick uses little-known documents and vivid details about the Nantucket whaling tradition to reveal the chilling facts of this infamous maritime disaster. In the Heart of the Sea—and now, its epic adaptation for the screen—will forever place the Essex tragedy in the American historical canon.
Nathaniel Philbrick is the author of In the Heart of the Sea, winner of the National Book Award; Mayflower, finalist for the Pulitzer Prize; Bunker Hill, winner of the New England Book Award; Sea of Glory; The Last Stand; Why Read Moby Dick?; Away Off Shore; and most recently, Valiant Ambition. He lives in Nantucket.
"Fascinating...One of our country's great adventure stories...when it comes to extremes, In the Heart of the Sea is right there."--The Wall Street Journal

"A book that gets in your bones...Philbrick has created an eerie thriller from a centuries old tale....Scrupulously researched and eloquently written...it would have earned Melville's admiration."--The New York Times Book Review

"[Told] with verve and authenticity...a classic tale of the sea."--San Francisco Chronicle

"Nathaniel Philbrick has taken one of the most horrifying stories in maritime history and turned it into a classic....One of the most chilling books I have ever read."--Sebastian Junger, author of The Perfect Storm