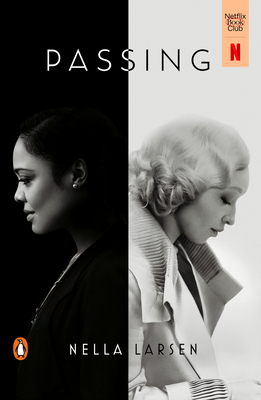 
On Our Shelves Now as of 24 Hours Ago. Call first to confirm.
A NETFLIX BOOK CLUB PICK

Clare Kendry is living on the edge. Light-skinned, elegant, and ambitious, she is married to a racist white man unaware of her African American heritage, and has severed all ties to her past after deciding to "pass" as a white woman. Clare's childhood friend, Irene Redfield, just as light-skinned, has chosen to remain within the African American community, and is simultaneously allured and repelled by Clare's risky decision to engage in racial masquerade for personal and societal gain. After frequenting African American-centric gatherings together in Harlem, Clare's interest in Irene turns into a homoerotic longing for Irene's black identity that she abandoned and can never embrace again, and she is forced to grapple with her decision to pass for white in a way that is both tragic and telling. First published in 1929, Passing feels just as timely as ever today.
Nella Larsen, one of the most acclaimed and influential writers of the Harlem Renaissance, was born Nellie Walker on April 13, 1891, in Chicago. She began publishing stories in the mid-1920s and published her first novel, Quicksand, in 1928. Passing came out the following year. Larsen was awarded a William E. Harmon Bronze Award for Distinguished Achievement Among Negroes and a Guggenheim Fellowship. She was unable to have her third novel accepted for publication and by the end of the 1930s had stopped writing altogether. She worked full time as a nurse until her death in 1964.
“The genius of this book is that its protagonists . . .  are complex and fully realized. . . . The work of a highly talented and thoughtful writer.”—Richard Bernstein, The New York Times

“[Larsen’s novels] open up a whole world of experience and struggle that seemed to me, when I first read them years ago, absolutely absorbing, fascinating, and indispensable.”—Alice Walker

"[Passing] is a moving tale about racial identity. Though the novel was first published in 1929, Larsen’s words ring true to this day. Since it’s 160 pages, it’s the kind of book you can start and finish in a day, but will linger in your mind long after you finish." —Men's Journal