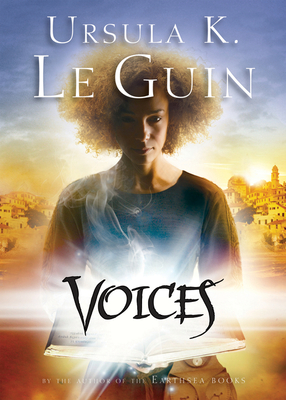 In this second novel in the Annals of the Western Shore trilogy, Ursula K. Le Guin brings readers a haunting and gripping coming-of-age story set against a backdrop of violence, intolerance, and magic.

Ansul was once a peaceful town filled with libraries, schools, and temples. But that was long ago, and the conquerors of this coastal city consider reading and writing to be acts punishable by death. And they believe the Oracle House, where the last few undestroyed books are hidden, is seething with demons.

But to seventeen-year-old Memer, the house is a refuge, a place of family and learning, ritual and memory—the only place where she feels truly safe.

Then an Uplands poet named Orrec and his wife, Gry, arrive, and everything in Memer's life begins to change. Will she and the people of Ansul at last be brave enough to rebel against their oppressors?

Voices is a novel that readers will not soon forget.

“Le Guin's crystalline prose and her ability to dramatise political and spiritual issues of our time are unequalled.” —Amanda Craig, London Times

“As always, Le Guin's language is as airy and sensuous as her concerns are weighty and abstract, every sentence as precise as a spade cut.” —Elizabeth Ward, The Washington Post

“Barbarians-versus-brainiacs may be well-trod turf, but Le Guin sure-footedly makes it new. She creates a protagonist with obvious appeal to her intended audience: a geeky girl with bad hair but a quick intelligence, who nurses a seething contempt for the illiterate thugs who run everything." —Anne Boles Levy, Los Angeles Times

The Annals of the Western Shore Trilogy includes: