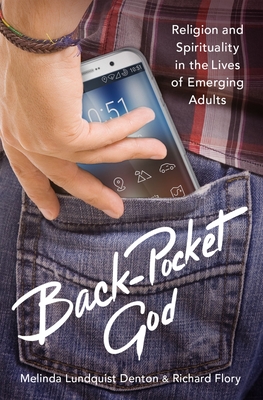 By Melinda Lundquist Denton, Richard Flory, Christian Smith (Foreword by)
$31.45
We can usually get this book in 3 to 5 days, except during a pandemic. We are doing our best

More than a decade ago, a group of researchers began to study the religious and spiritual lives of American teenagers. They tracked these young people over the course of a decade, revisiting them periodically to check in on the state -and future- of religion in America, and reporting on their findings in a series of books, beginning with Soul Searching (2005). Now, with Back-Pocket God, this mammoth research project comes to its conclusion. What have we learned about the changing shape of religion in America? Back-Pocket God explores continuity and change among young people from their teenage years through the latter stages of emerging adulthood. Melinda Lundquist Denton and Richard Flory find that the story of young adult religion is one of an overall decline in commitment and affiliation, and in general, a moving away from organized religion. Yet, there is also a parallel trend in which a small, religiously committed group of emerging adults claim faith as an important fixture in their lives. Emerging adults don't seem so much opposed to religion or to religious organizations, at least in the abstract, as they are uninterested in religion, at least as they have experienced it. Religion is like an app on the ubiquitous smartphones in our back pockets: readily accessible, easy to control, and useful-but only for limited purposes. Denton and Flory show that some of the popular assumptions about young people and religion are not as clear as what many people seem to believe. The authors challenge the characterizations of religiously unaffiliated emerging adults -sometimes called religious nones- as undercover atheists. At the other end of the spectrum, they question the assumption that those who are not religious will return to religion once they marry and have children.

Melinda Lundquist Denton is an Associate Professor of Sociology at the University of Texas at San Antonio. Her research examines the intersection of religion and family life in the United States. Her publications include A Faith of Their Own: Stability and Change in the Religiosity of America's Adolescents with Lisa D. Pearce and Soul Searching: The Religious and Spiritual Lives of American Teenagers with Christian Smith. Richard Flory is senior director of research and evaluation at the Center for Religion and Civic Culture at the University of Southern California. He is a sociologist whose research focuses on religious and cultural change, religion and urban life, and the religious and spiritual lives of youth and young adults. He has published several books, most recently, The Rise of Network Christianity: How Independent Leaders are Changing the Religious Landscape.