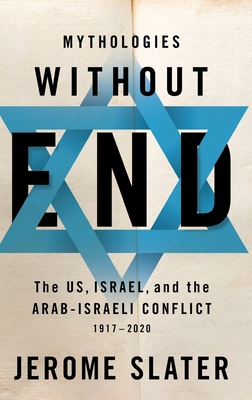 The history of modern Israel is a fiercely contested subject. From the Balfour declaration to the Six-Day War to the recent assault on Gaza, ideologically-charged narratives and counter-narratives battle for dominance not just in Israel itself but throughout the world. In the United States and Israel, the Israeli cause is treated as the more righteous one, albeit with important qualifiers and caveats. In Mythologies Without End, Jerome Slater takes stock of the conflict from its origins to the present day and argues that US policies in the region are largely a product of mythologies that are often flatly wrong. For example, the Israelis' treatment of Palestinians after 1948 undermined its claim that it was a true democracy, and the argument that Arab states refused to negotiate with Israel for decades is simply untrue. Because of widespread acceptance of these myths in both the US and Israel, the consequences have been devastating to all of the involved parties. In fact, the actual history is very nearly the converse of the mythology: it is Israel and the US that have repeatedly lost, discarded, or even deliberately sabotaged many opportunities to reach fair compromise settlements of the Arab-Israeli and Israeli-Palestinian conflicts. As Slater reexamines the entire history of the conflict from its onset at the end of WWI through the Netanyahu era, he argues that a refutation of the many mythologies that is a necessary first step toward solving the Arab-Israeli conflict. Focusing on both the US role in the conflict and Israel's actions, this book exposes the self-defeating policies of both nations policies which have only served to prolong the conflict far beyond when it should have been resolved.

Jerome Slater is a retired political science professor, who taught at Ohio State University (1963-1966) and the State University of New York at Buffalo (1967-1999). He was the Fulbright Lecturer in Political Science at Haifa University in 1989, and has lectured in Israel on other occasions. He isthe author of three books and over fifty articles in professional journals, national magazines, and newspapers including New Republic, Dissent, Huffington Post, Buffalo News, Christian Science Monitor, Tikkun, and Yale Review, among others.