Mastering the West: Rome and Carthage at War (Ancient Warfare and Civilization) (Paperback) 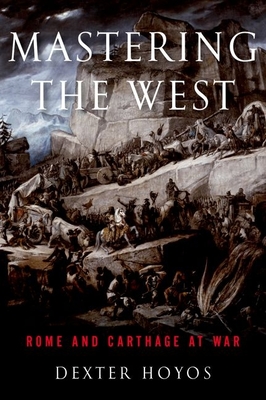 Mastering the West: Rome and Carthage at War (Ancient Warfare and Civilization) (Paperback)


We can usually get this book in 3 to 7 days, except during a pandemic. We are doing our best
(This book cannot be returned, even for store credit.)
To say the Punic Wars (264-146 BC) were a turning-point in world history is a vast understatement. These vicious battles pitted two flourishing Mediterranean powers against one another, leaving one an unrivaled giant and the other a literal pile of ash. To later observers, a collision between these civilizations seemed inevitable and yet, to the Romans and Carthaginians at the time, war erupted seemingly out of nowhere and was expected to be a short and trivial skirmish. Mastering the West offers a superlative narrative of all three wars as they are generally divided, while treating a full range of themes: the antagonists' military, naval, economic, and demographic resources and strategic opportunities; the political structures of both republics; questions of leadership and the contributions of leaders like Hannibal, Fabius the Delayer, Scipio Africanus, Masinissa, and Scipio Aemilianus; and the postwar impact of the conflicts on the participants and victims. Dexter Hoyos, a leading expert of the period, treats the two great powers evenly, without forgetting the important roles played by Syracuse, Macedon, and especially Numidia. Written with verve in a clear, accessible style, with a range of illustrations and newly-commissioned maps, Mastering the West is sure to restructure our understanding of this critical period in ancient history.

Dexter Hoyos is retired Associate Professor of Classics and Ancient History at the University of Sydney, Australia. His many books include, most recently, Hannibal: Rome's Greatest Enemy, The Carthaginians, A Companion to the Punic Wars, Livy: Rome's Italian Wars (with J. C. Yardley), and ACompanion to Roman Imperialism