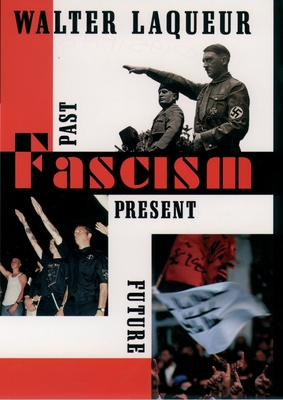 
We can usually get this book in 3 to 7 days, except during a pandemic. We are doing our best
(This book cannot be returned, even for store credit.)
Mussolini's march on Rome; Hitler's speeches before waves of goose-stepping storm troopers; the horrors of the Holocaust; burning crosses and neo-Nazi skinhead hooligans. Few words are as evocative, and even fewer ideologies as pernicious, as fascism. And yet, the world continues to witness the success of political parties in countries such as Italy, France, Austria, Russia, and elsewhere resembling in various ways historical fascism. Why, despite its past, are people still attracted to fascism? Will it ever again be a major political force in the world? Where in the world is it most likely to erupt next?
In Fascism: Past, Present, and Future, renowned historian Walter Laqueur illuminates the fascist phenomenon, from the emergence of Hitler and Mussolini, to Vladimir Zhirinovsky and his cohorts, to fascism's not so distant future. Laqueur describes how fascism's early achievements--the rise of Germany and Italy as leading powers in Europe, a reputation for being concerned about the fate of common people, the creation of more leisure for workers--won many converts. But what successes early fascist parties can claim, Laqueur points out, are certainly overwhelmed by its disasters: Hitler may have built the Autobahnen, but he also launched the war that destroyed them. Nevertheless, despite the Axis defeat, fascism was not forgotten: Laqueur tellingly uncovers contemporary adaptations of fascist tactics and strategies in the French ultra-nationalist Le Pen, the rise of skinheads and right-wing extremism, and Holocaust denial. He shows how single issues--such as immigrants and, more remarkably, the environment--have proven fruitful rallying points for neo-fascist protest movements. But he also reveals that European fascism has failed to attract broad and sustained support. Indeed, while skinhead bands like the Klansman and magazines such as Zyklon B grab headlines, fascism bereft of military force and war is at most fascism on the defense, promising to save Europe from an invasion of foreigners without offering a concrete future. Laqueur warns, however, that an increase in clerical fascism--such as the confluence of fascism and radical, Islamic fundamentalism--may come to dominate in parts of the Middle East and North Africa. The reason has little to do with religion: Underneath the 'Holy Rage' is frustration and old-fashioned class struggle. Fascism was always a movement of protest and discontent, and there is in the contemporary world a great reservoir of protest. Among the likely candidates, Laqueur singles out certain parts of Eastern Europe and the Third World.
In carefully plotting fascism's past, present, and future, Walter Laqueur offers a riveting, if sometimes disturbing, account of one of the twentieth century's most baneful political ideas, in a book that is both a masterly survey of the roots, the ideas, and the practices of fascism and an assessment of its prospects in the contemporary world.

Walter Laqueur is co-editor of the Journal of Contemporary History and serves as chairman of the International Research Council at the Center for Strategic and International Studies in Washington. His books include Black Hundred, Russia and Germany, The Long Road to Freedom, The Fate of the Revolution, Terrorism, The Dream that Failed, and an autobiography, Thursday's Child has Far to Go.