Life in the Political Machine: Dominant-Party Enclaves and the Citizens They Produce (Hardcover) 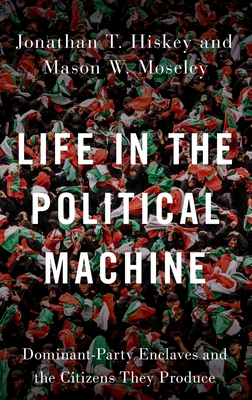 Life in the Political Machine: Dominant-Party Enclaves and the Citizens They Produce (Hardcover)


We can usually get this book in 3 to 7 days, except during a pandemic. We are doing our best
Whether in the northern provinces of Argentina, the central states of Mexico, or the southern states of the United States, less-than-democratic subnational regimes are often found within democratic national political systems. However, little is known about how or if these subnational pockets
foster political attitudes and behavior that threaten the democratic norms that exist at the national level. Life in the Political Machine offers one of the first systematic explorations of the ways in which subnational dominant-party enclaves influence citizens' political attitudes and behaviors through a focus on the provinces and states of Argentina and Mexico. Specifically, the authors find starkly
divergent patterns of political attitudes and behaviors among citizens in dominant-party enclaves as opposed to those living in competitive multiparty systems. In the latter, the authors find a political culture that approximates what scholars have long documented in established democracies. In the
former, they uncover three factors--the politicization of the rule of law, an uneven electoral playing field, and the partisan cooptation of state resources--that strongly shape citizens' understanding of democratic principles, accountability, and political participation. The authors argue that this
environment erodes public support for democracy at the national level and that these local strongholds of illiberalism thus provide added fuel to the recent drift from democracy globally. Ultimately, this book calls for greater attention to subnational variations in citizens' political attitudes and
behaviors in order to more fully understand the process through which a national democratic political culture can emerge.

Jonathan T. Hiskey is Associate Professor of Political Science at Vanderbilt University. His work focuses on the impact that Latin America's uneven democratization processes have had on various local political and development outcomes in the region. Mason W. Moseley is Assistant Professor of Political Science at West Virginia University. His research interests lie in comparative political behavior and public opinion, and he has published on protest, clientelism, and civic engagement, particularly in Latin America. He is the author of ProtestState: The Rise of Everyday Contention in Latin America.