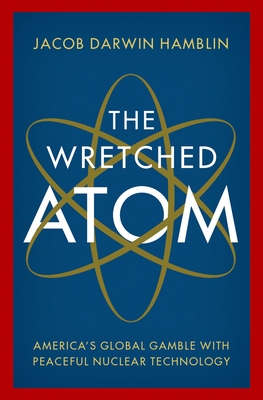 
We can usually get this book in 3 to 7 days, except during a pandemic. We are doing our best
A groundbreaking narrative of how the United States offered the promise of nuclear technology to the developing world and its gamble that other nations would use it for peaceful purposes. After the Second World War, the United States offered a new kind of atom that differed from the bombs that destroyed Hiroshima and Nagasaki. This atom would cure diseases, produce new foods, make deserts bloom, and provide abundant energy for all. It was an atom destined for the formerly colonized, recently occupied, and mostly non-white parts of the world that were dubbed the "wretched of the earth" by Frantz Fanon. The "peaceful atom" had so much propaganda potential that President Dwight Eisenhower used it to distract the world from his plan to test even bigger thermonuclear weapons. His scientists said the peaceful atom would quicken the pulse of nature, speeding nations along the path of economic development and helping them to escape the clutches of disease, famine, and energy shortfalls. That promise became one of the most misunderstood political weapons of the twentieth century. It was adopted by every subsequent US president to exert leverage over other nations' weapons programs, to corner world markets of uranium and thorium, and to secure petroleum supplies. Other countries embraced it, building reactors and training experts. Atomic promises were embedded in Japan's postwar recovery, Ghana's pan-Africanism, Israel's quest for survival, Pakistan's brinksmanship with India, and Iran's pursuit of nuclear independence. As The Wretched Atom shows, promoting civilian atomic energy was an immense gamble, and it was never truly peaceful. American promises ended up exporting violence and peace in equal measure. While the United States promised peace and plenty, it planted the seeds of dependency and set in motion the creation of today's expanded nuclear club.

Jacob Darwin Hamblin is Professor of History at Oregon State University. His books include Poison in the Well: Radioactive Waste in the Oceans at the Dawn of the Nuclear Age; Oceanographers and the Cold War; and Arming Mother Nature: The Birth of Catastrophic Environmentalism (OUP, 2013), which won the Paul Birdsall Prize of the American Historical Association and the Watson Davis and Helen Miles Davis Prize of the History of Science Society.