Liars: Falsehoods and Free Speech in an Age of Deception (Inalienable Rights) (Hardcover) 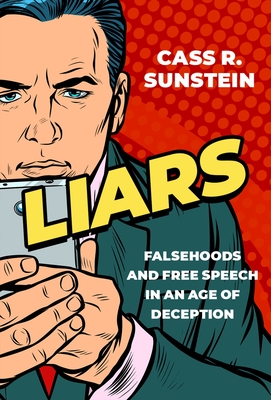 Liars: Falsehoods and Free Speech in an Age of Deception (Inalienable Rights) (Hardcover)


We can usually get this book in 3 to 7 days, except during a pandemic. We are doing our best
A powerful analysis of why lies and falsehoods spread so rapidly now, and how we can reform our laws and policies regarding speech to alleviate the problem. Lying has been with us from time immemorial. Yet today is different-and in many respects worse. All over the world, people are circulating damaging lies, and these falsehoods are amplified as never before through powerful social media platforms that reach billions. Liars are saying that COVID-19 is
a hoax. They are claiming that vaccines cause autism. They are lying about public officials and about people who aspire to high office. They are lying about their friends and neighbors. They are trying to sell products on the basis of untruths. Unfriendly governments, including Russia, are
circulating lies in order to destabilize other nations, including the United Kingdom and the United States. In the face of those problems, the renowned legal scholar Cass Sunstein probes the fundamental question of how we can deter lies while also protecting freedom of speech. To be sure, we cannot eliminate lying, nor should we try to do so. Sunstein shows why free societies must generally allow falsehoods and lies, which cannot and should not be excised from democratic debate. A main reason is that we cannot trust governments to make unbiased judgments about what counts
as fake news. However, governments should have the power to regulate specific kinds of falsehoods: those that genuinely endanger health, safety, and the capacity of the public to govern itself. Sunstein also suggests that private institutions, such as Facebook and Twitter, have a great deal of
room to stop the spread of falsehoods, and they should be exercising their authority far more than they are now doing. As Sunstein contends, we are allowing far too many lies, including those that both threaten public health and undermine the foundations of democracy itself.

Cass R. Sunstein is the Robert Walmsley University Professor at Harvard University. From 2009 to 2012, he was Administrator of the White House Office of Information and Regulatory Affairs. In 2018, he received the Holberg Prize from the Government of Norway, often described as the equivalent of theNobel Prize for law and humanities. Founder and director of the Program on Behavioral Economics and Public Policy at Harvard Law School, he has been involved in law reform activities in nations all over the world. He is the author of many articles and books, including Nudge, How Change Happens, andToo Much Information.