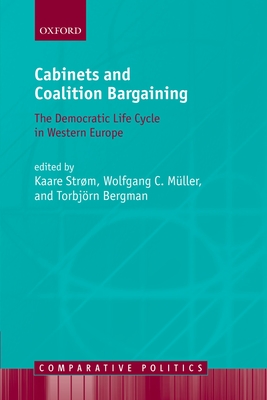 
We can usually get this book in 3 to 7 days, except during a pandemic. We are doing our best
(This book cannot be returned, even for store credit.)
Cabinets and Coalition Bargaining provides a comprehensive analysis of coalition politics in Western Europe over the post-war period. It champions a dynamic approach in which the various stages in the life of coalitions influence each other. After a review of the literature a theory chapter addresses the roles of bargaining and transaction costs in coalition governance. Eight comparative chapters address the topics of government formation (government type, formation duration), coalition agreements, portfolio allocation, conflict management, cabinet termination and duration, and the electoral consequences of coalition government. The book is based on the most comprehensive data set ever employed in coalition studies that includes both coalitional and single-party countries and governments. Each chapter first provides a comparative overview of the phenomenon under study and then moves on to state-of-the art statistical analysis. Conceptually and in the statistical analysis the study argues for an integrated approach stressing the relevance of countries, time, 'structural attributes', actors' preferences, institutions, the coalition's bargaining environment, and 'critical events'. Indeed, sufficient explanations of most phenomena under study require independent variables from several of these categories. Comparative Politics is a series for students, teachers, and researchers of political science that deals with contemporary government and politics. Global in scope, books in the series are characterised by a stress on comparative analysis and strong methodological rigour. The series is published in association with the European Consortium for Political Research. For more information visit www.essex.ac.uk/ecpr The Comparative Politics Series is edited by Professor David M. Farrell, School of Politics and International Relations, University College Dublin, Kenneth Carty, Professor of Political Science, University of British Columbia, and Professor Dirk Berg-Schlosser, Institute of Political Science, Philipps University, Marburg.