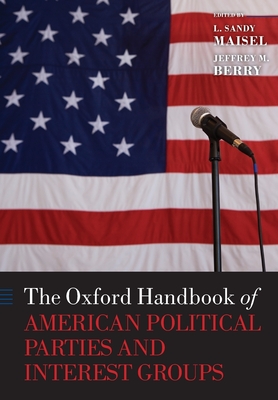 
We can usually get this book in 3 to 7 days, except during a pandemic. We are doing our best
(This book cannot be returned, even for store credit.)
The Oxford Handbook of American Political Parties and Interest Groups is a major new volume that will help scholars assess the current state of scholarship on parties and interest groups and the directions in which it needs to move. Never before has the academic literature on political parties received such an extended treatment. Twenty nine chapters critically assess both the major contributions to the literature and the ways in which it has developed. With contributions from most of the leading scholars in the field, the volume provides a definitive point of reference for all those working in and around the area. Equally important, the authors also identify areas of new and interesting research. These chapters offer a distinctive point of view, an argument about the successes and failures of past scholarship, and a set of recommendations about how future work ought to develop. This volume will help set the agenda for research on political parties and interest groups for the next decade. The Oxford Handbooks of American Politics are a set of reference books offering authoritative and engaging critical overviews of the state of scholarship on American politics. Each volume focuses on a particular aspect of the field. The project is under the General Editorship of George C. Edwards III, and distinguished specialists in their respective fields edit each volume. The Handbooks aim not just to report on the discipline, but also to shape it as scholars critically assess the scholarship on a topic and propose directions in which it needs to move. The series is an indispensable reference for anyone working in American politics. General Editor for The Oxford Handbooks of American Politics: George C. Edwards III

L. Sandy Maisel is a former candidate for Congress and a Democratic party activist, he is the author of From Obscurity to Oblivion: Running in the Congressional Primary, Parties and Elections in America: The Electoral Process (published in its Third Edition, Post-Election Edition in 2001), and Two Parties -- Or More? The American Party System, with John Bibby, published in a second edition in 2002; he is also the editor of The Parties Respond: Changes in American Parties and Campaigns, now in its fourth edition, as well as the general editor of Jews in American Politics and Political Parties and Elections in the United States: An Encyclopedia. Sandy is also the series editor of Dilemmas in American Politics series. He is William R. Kenan, Jr. Professor of Government, Chair of the Government Department, and Director of the Colby in Washington Program. Professor Berry specializes in the areas of interest groups, citizen participation, nonprofits, and public policymaking. He is the author or co-author of Lobbying for the People (Princeton, 1977), The Interest Group Society (Longman, 4th ed., 2007), Feeding Hungry People: Rulemaking in the Food Stamp Program (Rutgers, 1984), The Challenge of Democracy (Houghton Mifflin, 9th ed., 2007), and The Rebirth of Urban Democracy (Brookings, 1993), winner of the American Political Science Association's 1994 Gladys Kammerer Award for the Best Book in American Politics, and the American Political Science Association Organized Section on Urban Politics' 1994 Best Book in Urban Politics Award.