Heligoland: Britain, Germany, and the Struggle for the North Sea (Hardcover) 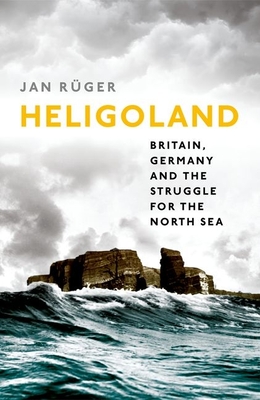 Heligoland: Britain, Germany, and the Struggle for the North Sea (Hardcover)


This book has been declared out of stock indefinitely, so we are unlikely to be able to get it.
On 18 April 1947, British forces set off the largest non-nuclear explosion in history. The target was a small island in the North Sea, fifty miles off the German coast, which for generations had stood as a symbol of Anglo-German conflict: Heligoland. A long tradition of rivalry was to come to an end here, in the ruins of Hitler's island fortress. Pressed as to why it was not prepared to give Heligoland back, the British government declared that the island represented everything that was wrong with the Germans: 'If any tradition was worth breaking, and if any sentiment was worth changing, then the German sentiment about Heligoland was such a one'. Drawing on a wide range of archival material, Jan Ruger explores how Britain and Germany have collided and collaborated in this North Sea enclave. For much of the nineteenth century, this was Britain's smallest colony, an inconvenient and notoriously discontented outpost at the edge of Europe. Situated at the fault line between imperial and national histories, the island became a metaphor for Anglo-German rivalry once Germany had acquired it in 1890. Turned into a naval stronghold under the Kaiser and again under Hitler, it was fought over in both world wars. Heavy bombardment by the Allies reduced it to ruins, until the Royal Navy re-took it in May 1945. Returned to West Germany in 1952, it became a showpiece of reconciliation, but one that continues to wear the scars of the twentieth century. Tracing this rich history of contact and conflict from the Napoleonic Wars to the Cold War, Heligoland brings to life a fascinating microcosm of the Anglo-German relationship. For generations this cliff-bound island expressed a German will to bully and battle Britain; and it mirrored a British determination to prevent Germany from establishing hegemony on the Continent. Caught in between were the Heligolanders and those involved with them: spies and smugglers, poets and painters, sailors and soldiers. Far more than just the history of a small island in the North Sea, this is the compelling story of a relationship which has defined modern Europe.

Jan Ruger teaches history at Birkbeck, University of London, having previously held a post-doctoral fellowship at Yale. He is particularly interested in comparative and transnational history, the cultural history of conflict, and the history of Anglo-German relations. His previous book is The Great Naval Game: Britain and Germany in the Age of Empire (2007), which explores the theatre of power and identity that unfolded between Britain and Germany in the decades before the First World War.