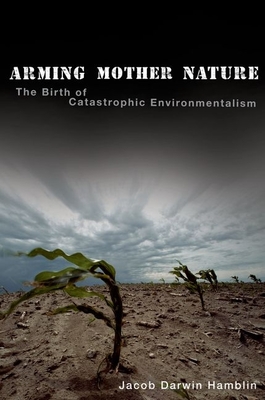 
We can usually get this book in 3 to 7 days, except during a pandemic. We are doing our best
When most Americans think of environmentalism, they think of the political left, of vegans dressed in organic-hemp fabric, lofting protest signs. In reality, writes Jacob Darwin Hamblin, the movement--and its dire predictions--owe more to the Pentagon than the counterculture. In Arming Mother Nature, Hamblin argues that military planning for World War III essentially created "catastrophic environmentalism" the idea that human activity might cause global natural disasters. This awareness, Hamblin shows, emerged out of dark ambitions, as governments poured funds into environmental science after World War II, searching for ways to harness natural processes--to kill millions of people. Proposals included the use of nuclear weapons to create artificial tsunamis or melt the ice caps to drown coastal cities; setting fire to vast expanses of vegetation; and changing local climates. Oxford botanists advised British generals on how to destroy enemy crops during the war in Malaya; American scientists attempted to alter the weather in Vietnam. This work raised questions that went beyond the goal of weaponizing nature. By the 1980s, the C.I.A. was studying the likely effects of global warming on Soviet harvests. "Perhaps one of the surprises of this book is not how
little was known about environmental change, but rather how much," Hamblin writes. Driven initially by strategic imperatives, Cold War scientists learned to think globally and to grasp humanity's power to alter the environment. "We know how we can modify the ionosphere," nuclear physicist Edward Teller proudly stated. "We have already done it." Teller never repented. But many of the same individuals and institutions that helped the Pentagon later warned of global warming and other potential disasters. Brilliantly argued and deeply researched, Arming Mother Nature changes our understanding of the history of the Cold War and the birth of modern environmental science.

Jacob Darwin Hamblin is Professor of History at Oregon State University. His books include Poison in the Well: Radioactive Waste in the Oceans at the Dawn of the Nuclear Age, Oceanographers and the Cold War, and Science in the Early Twentieth Century: An Encyclopedia.