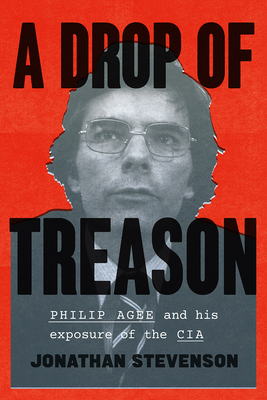 Philip Agee’s story is the stuff of a John le Carré novel—perilous and thrilling adventures around the globe. He joined the CIA as a young idealist, becoming an operations officer in hopes of seeing the world and safeguarding his country. He was the consummate intelligence insider, thoroughly entrenched in the shadow world. But in 1975, he became the first such person to publicly betray the CIA—a pariah whose like was not seen again until Edward Snowden. For almost forty years in exile, he was a thorn in the side of his country.

The first biography of this contentious, legendary man, Jonathan Stevenson’s A Drop of Treason is a thorough portrait of Agee and his place in the history of American foreign policy and the intelligence community during the Cold War and beyond. Unlike mere whistleblowers, Agee exposed American spies by publicly blowing their covers. And he didn’t stop there—his was a lifelong political struggle that firmly allied him with the social movements of the global left and against the American project itself from the early 1970s on. Stevenson examines Agee’s decision to turn, how he sustained it, and how his actions intersected with world events.

Having made profound betrayals and questionable decisions, Agee lived a rollicking, existentially fraught life filled with risk. He traveled the world, enlisted Gabriel García Márquez in his cause, married a ballerina, and fought for what he believed was right. Raised a conservative Jesuit in Tampa, he died a socialist expat in Havana. In A Drop of Treason, Stevenson reveals what made Agee tick—and what made him run.

Jonathan Stevenson is senior fellow for U.S. defense and managing editor of Survival at the International Institute for Strategic Studies (IISS). He was previously professor of strategic studies at the U.S. Naval War College, and he has served as director for political-military affairs, Middle East and North Africa, on the National Security Council. He is the author of several books, including Thinking Beyond the Unthinkable: Harnessing Doom from the Cold War to the Age of Terror and “We Wrecked the Place”: Contemplating and End to the Northern Irish Troubles.

"Remarkably well researched and treats complex issues with admirable clarity. . . . [A Drop of Treason] offers a vivid snapshot of America in the mid-1970s, when the collapse of institutional authority after the Vietnam War and the Watergate scandal was followed not by revolution or reformation but by exhaustion and decadence.”

“One of America’s ‘most hated’ spies receives a lively, thoughtful biography. Stevenson has searched the archives and interviewed everyone willing to talk about Philip Agee. . . . An insightful and evenhanded portrait.”
— Kirkus (starred review)

“Stevenson portrays Philip Agee’s thrilling story and what made him take action against his country.”
— The Bookseller

"Jonathan Stevenson’s biography of the turncoat CIA officer Philip Agee leaves the reader with an unexpected appreciation for the durability of the republic. One finishes his fine book thinking it was something of a miracle that America survived the 1970s and ultimately won the Cold War. The Agee controversy was just a single data point during a decade that began with the shootings at Kent State and ended with the Iranian hostage crisis and the Soviet capture of Afghanistan. But his story illustrates the moral exhaustion of post-Watergate and pre-Reagan America."
— Commentary Magazine

“Stevenson brings an insider's knowledge and a scholar-writer's talent to this riveting biography of the turncoat spy Philip Agee. A Drop of Treason is rich in historical revelation and psychological and moral insight into a fascinating figure of America's long twilight struggle.”
— George Packer, author of 'Last Best Hope: America in Crisis and Renewal'

“With A Drop of Treason, Jonathan Stevenson does more than give us a readable, much-needed biography of Philip Agee's wild life, taking us from the lawns of Notre Dame to the streets of Hamburg and the plazas of Havana. By placing Agee's life in the context of the transatlantic left, he illuminates an often-overlooked facet of the Cold War with cloak-and-dagger elan and historical sweep.”
— Clay Risen, author of 'The Crowded Hour: Theodore Roosevelt, the Rough Riders and the Dawn of the American Century'

“A Drop of Treason is biography in its highest form, unearthing the central fault lines of America’s foreign policy through Agee’s troubled path from idealism to disenchantment to partial rehabilitation. Stevenson’s book is a tour de force—a must-read for anyone curious to understand the troubling course of America’s global presence from the Cold War era to the time of Donald Trump.”
— Karen Greenberg, director of the Center on National Security at Fordham University and author of 'Rogue Justice: The Making of the Security State'

“Set against the backdrop of the Cold War, A Drop of Treason reads like a spy thriller, chronicling the life of turned CIA officer Philip Agee. Stevenson masterfully brings together a real-life story of espionage, betrayal, and the dramatic consequences that befell one of the first Americans to publicly turn on the CIA.”
— Ali Soufan, former FBI special agent and author of 'The Black Banners (Declassified): How Torture Derailed the War on Terror after 9/11'

“In this engaging biography, Stevenson gives us Philip Agee as a man who ‘straddled the giddy line’ between dissenter and traitor, between exile and expat, between cad and antihero. Agee’s complicated life, in Stevenson’s able hands, becomes a lens through which the past half century of statecraft and spycraft come into sharp focus, and with them the politics and culture of a tumultuous era.”
— Gary Greenberg, practicing psychotherapist and author of 'The Book of Woe' and “In the Kingdom of the Unabomber”