Prisoners of Shangri-La: Tibetan Buddhism and the West (Paperback) 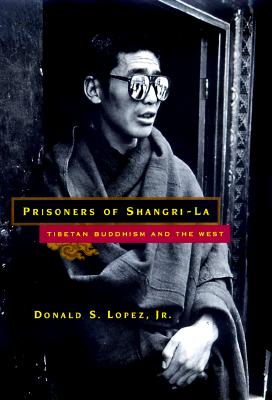 Prisoners of Shangri-La: Tibetan Buddhism and the West (Paperback)


This book has been declared out of stock indefinitely, so we are unlikely to be able to get it.
Prisoners of Shangri-La is a provocative analysis of the romance of Tibet, a romance that, even as it is invoked by Tibetan lamas living in exile, ultimately imprisons those who seek the goal of Tibetan independence from Chinese occupation.

"Lopez lifts the veil on America's romantic vision of Tibet to reveal a country and a spiritual history more complex and less ideal than popular perceptions allow. . . . Lively and engaging, Lopez's book raises important questions about how Eastern religions are often co-opted, assimilated and misunderstood by Western culture."—Publishers Weekly

"Proceeding with care and precision, Lopez reveals the extent to which scholars have behaved like intellectual colonialists. . . . Someone had to burst the bubble of pop Tibetology, and few could have done it as resoundingly as Lopez."—Booklist

"Fascinating. . . [A] provocative exploration. Lopez conveys the full dizziness of the Western encounter with Tibet and Tibetan Buddhism."—Fred Pheil, Tricycle: The Buddhist Review

"A timely and courageous exploration. . . . [Lopez's] book will sharpen the terms of the debate over what the Tibetans and their observers can or should be doing about the place and the idea of Tibet. And that alone is what will give us all back our Shambhala."—Jonathan Spence, Lingua Franca Book Review

"Lopez's most important theme is that we should be wary of the idea . . . that Tibet has what the West lacks, that if we were only to look there we would find the answers to our problems. Lopez's book shows that, on the contrary, when the West has looked at Tibet, all that it has seen is a distorted reflection of itself."—Ben Jackson, Times Higher Education Supplement

Donald S. Lopez Jr. is the Arthur E. Link Distinguished University Professor of Buddhist and Tibetan Studies in the Department of Asian Languages and Cultures at the University of Michigan.
"Prisoners of Shangri-La is a tour de force across the multi-faceted imaginary that is Tibet... Lopez is one of the pioneers uncovering the entangled histories of 'east' and 'west.'"
— Religious Studies Review