Religion and the Demise of Liberal Rationalism: The Foundational Crisis of the Separation of Church and State (Paperback) 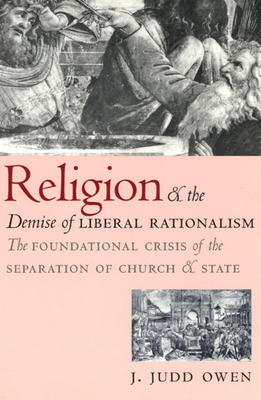 Religion and the Demise of Liberal Rationalism: The Foundational Crisis of the Separation of Church and State (Paperback)


We can usually get this book in 3 to 7 days, except during a pandemic. We are doing our best
If liberalism is premised on inclusion, pluralism, and religious neutrality, can the separation of church and state be said to have a unitary and rational foundation? If we accept that there are no self-evident principles of morality or politics, then doesn't any belief in a rational society become a sort of faith? And how can liberalism mediate impartially between various faiths—as it aims to do—if liberalism itself is one of the competing faiths?

J. Judd Owen answers these questions with a remarkable critical analysis of four twentieth-century liberal and postliberal thinkers: John Dewey, John Rawls and, most extensively, Richard Rorty and Stanley Fish. His unique readings of these theorists and their approaches to religion lead him to conclusions that are meticulously constructed and surprising, arguing against the perception of liberalism as simple moral or religious neutrality, calling into question the prevailing justifications for separation of church and state, and challenging the way we think about the very basis of constitutional government.
J. Judd Owen is an assistant professor of political science at Emory University.