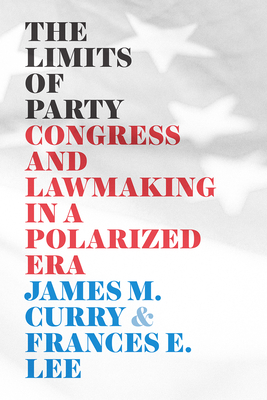 To many observers, Congress has become a deeply partisan institution where ideologically-distinct political parties do little more than engage in legislative trench warfare. A zero-sum, winner-take-all approach to congressional politics has replaced the bipartisan comity of past eras. If the parties cannot get everything they want in national policymaking, then they prefer gridlock and stalemate to compromise. Or, at least, that is the conventional wisdom.

In The Limits of Party, James M. Curry and Frances E. Lee challenge this conventional wisdom. By constructing legislative histories of congressional majority parties’ attempts to enact their policy agendas in every congress since the 1980s and by drawing on interviews with Washington insiders, the authors analyze the successes and failures of congressional parties to enact their legislative agendas.
​
Their conclusions will surprise many congressional observers: Even in our time of intense party polarization, bipartisanship remains the key to legislative success on Capitol Hill. Congressional majority parties today are neither more nor less successful at enacting their partisan agendas. They are not more likely to ram though partisan laws or become mired in stalemate. Rather, the parties continue to build bipartisan coalitions for their legislative priorities and typically compromise on their original visions for legislation in order to achieve legislative success.

James M. Curry is associate professor in the Department of Political Science at the University of Utah. He is the author of Legislating in the Dark..

Frances E. Lee is professor of politics and public affairs at Princeton University. Her previous books include Insecure Majorities: Congress and the Perpetual Campaign and Beyond Ideology: Politics, Principles and Partisanship in the U.S. Senate

“The Limits of Party a powerful and authoritative work that should invest our understandings and our classrooms. The book is rich in data and argument. The authors ask:? How much has congressional lawmaking changed during recent decades? The answer: Not as much as we might think!?There is an awful lot of continuity in our cumbersome separation-of-powers system.”
— David Mayhew, Yale University

“In this provocative and cogently-argued book, Curry and Lee demonstrate convincingly the very real limits of congressional majority party power. While contemporary congressional politics may be marked by highly partisan and centralized processes, the factors that govern lawmaking and legislative outcomes have remain largely unchanged over the past half-century. The authors show that laws are generally enacted with broad bipartisan support, and majority parties still face struggles to coordinate internally, even though they face fewer ideological divides than in the past. This important book adds nuance to the literature on party influence and serves as a meaningful corrective to arguments that polarization has changed everything about Congress. It will be deservedly widely read and discussed.”
— Tracy Sulkin, University of Illinois at Urbana-Champaign