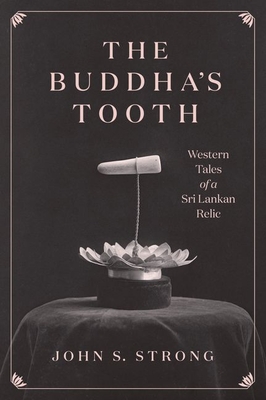 
We can usually get this book in 3 to 7 days, except during a pandemic. We are doing our best
John S. Strong unravels the storm of influences shaping the received narratives of two iconic sacred objects.

Bodily relics such as hairs, teeth, fingernails, pieces of bone—supposedly from the Buddha himself—have long served as objects of veneration for many Buddhists. Unsurprisingly, when Western colonial powers subjugated populations in South Asia, they used, manipulated, redefined, and even destroyed these objects to exert control.

In The Buddha’s Tooth, John S. Strong examines Western stories, from the sixteenth to the twentieth century, surrounding two significant Sri Lankan sacred objects to illuminate and concretize colonial attitudes toward Asian religions. First, he analyzes a tale about the Portuguese capture and public destruction, in the mid-sixteenth century, of a tooth later identified as a relic of the Buddha. Second, he switches gears to look at the nineteenth-century saga of British dealings with another tooth relic of the Buddha—the famous Daḷadā enshrined in a temple in Kandy—from 1815, when it was taken over by English forces, to 1954, when it was visited by Queen Elizabeth II. As Strong reveals, the stories of both the Portuguese tooth and the Kandyan tooth reflect nascent and developing Western understandings of Buddhism, realizations of the cosmopolitan nature of the tooth, and tensions between secular and religious interests.
John S. Strong is the Charles A. Dana Emeritus Professor of Religious Studies at Bates College. He is the author of several books, including Relics of the Buddha and Buddhisms: An Introduction.
“Insightful, provocative, and meticulously researched, The Buddha’s Tooth is a fascinating analysis of how European colonials comprehended and attempted to mitigate the ascribed powers of the most revered relic in Buddhist Sri Lanka. Strong’s intricate study leads its reader from an episodic rendering into a wide-ranging apprehension of how European conceptions of Buddhism were fashioned and further forged over four hundred years of encounter.”
— John Holt, Bowdoin College

“The product of extensive research, this authoritative book recounts how this sacred tooth has served as an object of religious and political significance to both the colonized and colonizers, adroitly illustrating many of the dominant Western approaches and attitudes toward Buddhism over the last several centuries.”
— Stephen C. Berkwitz, Missouri State University

“Strong offers a stimulating and perceptive study of how European and British persons engaged with Buddha relics materially and ideationally. This is a valuable contribution to intellectual and diplomatic history, as well as to our understanding of how European ideas about Buddhas and Buddhism altered over time.”
— Anne M. Blackburn, Cornell University