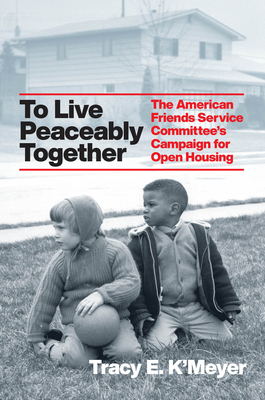 
We can usually get this book in 3 to 7 days, except during a pandemic. We are doing our best
A groundbreaking look at how a predominantly white faith-based group reset the terms of the fight to integrate US cities.

The bitterly tangled webs of race and housing in the postwar United States hardly suffer from a lack of scholarly attention. But Tracy K’Meyer’s To Live Peaceably Together delivers something truly new to the field: a lively examination of a predominantly white faith-based group—the Quaker-aligned American Friends Service Committee (AFSC)—that took a unique and ultimately influential approach to cultivating wider acceptance of residential integration. Built upon detailed stories of AFSC activists and the obstacles they encountered in their work in Chicago, Philadelphia, and Richmond, California, To Live Peaceably Together is an engaging and timely account of how the organization allied itself to a cause that demanded constant learning, reassessment, and self-critique. K’Meyer details the spiritual and humanist motivations behind the AFSC, its members’ shifting strategies as they came to better understand structural inequality, and how those strategies were eventually adopted by a variety of other groups. Her fine-grained investigation of the cultural ramifications of housing struggles provides a fresh look at the last seventy years of racial activism.

Tracy E. K’Meyer is professor of history at the University of Louisville.
“Residential segregation remains one of the seemingly intractable problems of American society, anchored in racial prejudice and the legacies of decades of government policy. In To Live Peaceably Together, K’Meyer tells the story of how, in the 1950s and ’60s, white Quaker activists and allies used a variety of strategies and tactics to try to achieve open housing. Her deeply researched, well-argued book shows us how the American Friends Service Committee was central to this aspect of the early civil rights movement and how its work inspired other groups. K’Meyer proves beyond question how important spiritual motivation was for many of the activists who sought a more just America.”
— Thomas Hamm, author of The Quakers in America

“To Live Peaceably Together is an original and highly readable book that reorients our understanding of the Black Freedom Struggle in the North by focusing on an advocacy group run mainly by white allies, a historical topic with great contemporary relevance. I salute K’Meyer’s achievement in telling this fascinating and overlooked story.”
— Todd Michney, Georgia Institute of Technology