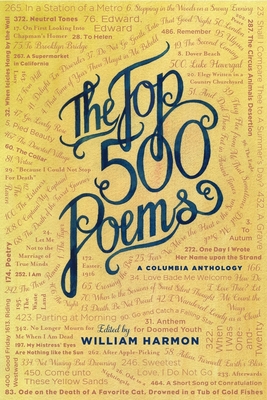 
We can usually get this book in 3 to 7 days, except during a pandemic. We are doing our best
The Top 500 Poems offers a vivid portrait of poetry in English, assembling a host of popular and enduring poems as chosen by critics, editors, poets, and general readers. These works speak across centuries, beginning with Chaucer's resourceful inventions and moving through Shakespeare's masterpieces, John Donne's complex originality, and Alexander Pope's mordant satires. The anthology also features perennial favorites such as William Blake, William Wordsworth, and John Keats; Emily Dickinson's prisms of profundity; the ironies of Wallace Stevens and T.S. Eliot; and the passion of Sylvia Plath and Allen Ginsberg. These 500 poems are verses that readers either know already or will want to know, encapsulating the visceral power of truly great literature. William Harmon provides illuminating commentary to each work and a rich introduction that ties the entire collection together.
William Harmon is the James Gordon Hanes Professor Emeritus in the Humanities at the University of North Carolina, Chapel Hill. He is the editor of A Handbook to Literature, The Classic Hundred Poems, and The Oxford Book of American Light Verse, and he is the author of several volumes of poetry, including winners of the Lamont Award and the William Carlos Williams Award.