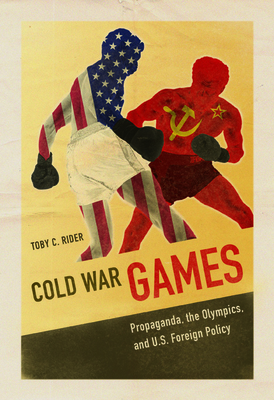 It is the early Cold War. The Soviet Union appears to be in irresistible ascendance and moves to exploit the Olympic Games as a vehicle for promoting international communism. In response, the United States conceives a subtle, far-reaching psychological warfare campaign to blunt the Soviet advance.

Drawing on newly declassified materials and archives, Toby C. Rider chronicles how the U.S. government used the Olympics to promote democracy and its own policy aims during the tense early phase of the Cold War. Rider shows how the government, though constrained by traditions against interference in the Games, eluded detection by cooperating with private groups, including secretly funded émigré organizations bent on liberating their home countries from Soviet control. At the same time, the United States utilized Olympic host cities as launching pads for hyping the American economic and political system. Behind the scenes, meanwhile, the government attempted clandestine manipulation of the International Olympic Committee. Rider also details the campaigns that sent propaganda materials around the globe as the United States mobilized culture in general, and sports in particular, to fight the communist threat.

"Impressively researched, including access to recently declassified material . . . Rider's extensive research is presented in a series of compelling and interconnected examples, all of which support and sustain his thesis."--H-Net


"Throughout his well-written examination of these matters, Rider exhibits considerable skill as an historian. . . . With Cold War Games, Rider has contributed an essential work to the scholarship regarding the cultural dimensions of international politics."--Journal of Sport History


"This book is well researched and will appeal to popular culture fans who are interested in sports diplomacy and the Olympic Games. The scholarship is immensely impressive, with an excellent section of notes that the reader will find as informative as the text."--Journal of American Culture

"A particularly fascinating piece of diplomatic history."--Diplomat and International Canada

"The scholarship is immensely impressive. There is nothing in the literature of the early Cold War that competes with this book. Rider convincingly makes the case for the secret role of the U.S. government in international sports."--Robert Edelman, author of Serious Fun: A History of Spectator Sports in the USSR

"Rider has explored this subject in depth and detail not previously seen in our field. 'No stone unturned' is one thought generated after having read the book. Very impressive."--Stephen Wenn, co-author of Selling the Five Rings: The IOC and the Rise of Olympic Commercialism