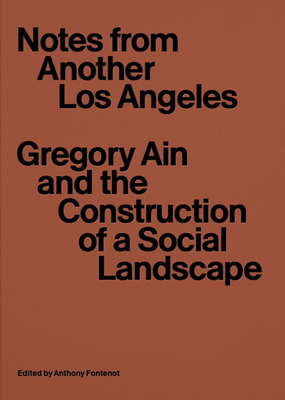 The Southern California architect Gregory Ain (1908–1988) collaborated with some of the most celebrated figures of midcentury design, including Rudolph Schindler, Richard Neutra, and Charles and Ray Eames, and yet is relatively unknown today. Ain’s architectural work in the 1930s and 1940s was shaped by his radical politics; J. Edgar Hoover called him “the most dangerous architect in America.” Although Ain designed many private homes for wealthy liberals, he was more interested in finding ways to produce high-quality, low-cost houses in well-designed neighborhood settings for working-class families. This is the first book to focus on these innovative housing projects and examne the way they synthesized Ain’s architectural and political ideals.

The book presents historical black-and-white photographs by the celebrated photographer of midcentury modern architecture Julius Shulman, depicting the houses in their original condition, as well as contemporary color photographs by Kyungsub Shin showing four of Ain’s built housing projects—Dunsmuir Flats, Park Planned Homes, Avenal Cooperative Housing, and Mar Vista Housing. These are accompanied by essays by contemporary historians and historical articles written by and about Ain, including a previously unpublished text by Esther McCoy.

Ain’s housing projects represented a new paradigm in neighborhood design that celebrated the everyday life and diversity of ordinary people. Ain’s innovations—including open kitchens and movable partition walls for a “flexible” house—aimed to solve specific problems rather than pursue arbitrary expressions of uniqueness. His high-density developments anticipate contemporary efforts to design building with a minimal-footprint. Generously illustrated, this volume reintroduces Ain to a forgetful field.