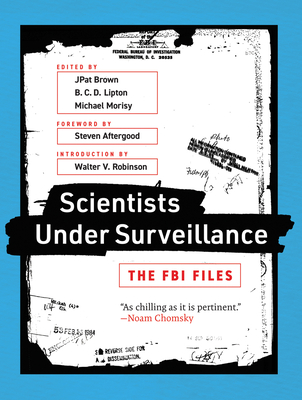 Armed with ignorance, misinformation, and unfounded suspicions, the FBI under J. Edgar Hoover cast a suspicious eye on scientists in disciplines ranging from physics to sex research. If the Bureau surveilled writers because of what they believed (as documented in Writers Under Surveillance), it surveilled scientists because of what they knew. Such scientific ideals as the free exchange of information seemed dangerous when the Soviet Union and the United States regarded each other with mutual suspicion that seemed likely to lead to mutual destruction. Scientists Under Surveillance gathers FBI files on some of the most famous scientists in America, reproducing them in their original typewritten, teletyped, hand-annotated form.

Readers learn that Isaac Asimov, at the time a professor at Boston University's School of Medicine, was a prime suspect in the hunt for a Soviet informant codenamed ROBPROF (the rationale perhaps being that he wrote about robots and was a professor). Richard Feynman had a "hefty" FBI file, some of which was based on documents agents found when going through the Soviet ambassador's trash (an invitation to a physics conference in Moscow); other documents in Feynman's file cite an informant who called him a "master of deception" (the informant may have been Feynman's ex-wife). And the Bureau's relationship with Alfred Kinsey, the author of The Kinsey Report, was mutually beneficial, with each drawing on the other's data.

The files collected in Scientists Under Surveillance were obtained through Freedom of Information Act requests by MuckRock, a nonprofit engaged in the ongoing project of freeing American history from the locked filing cabinets of government agencies.