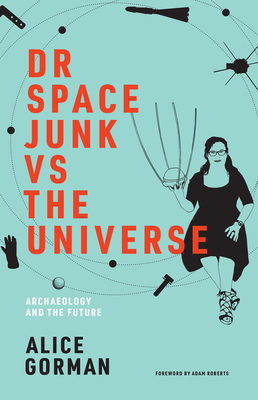 A pioneering space archaeologist explores artifacts left behind in space and on Earth, from moon dust to Elon Musk's red sports car.

Alice Gorman is a space archaeologist: she examines the artifacts of human encounters with space. These objects, left behind on Earth and in space, can be massive (dead satellites in eternal orbit) or tiny (discarded zip ties around a defunct space antenna). They can be bold (an American flag on the moon) or hopeful (messages from Earth sent into deep space). They raise interesting questions: Why did Elon Musk feel compelled to send a red Tesla into space? What accounts for the multiple rocket-themed playgrounds constructed after the Russians launched Sputnik? Gorman—affectionately known as “Dr Space Junk” —takes readers on a journey through the solar system and beyond, deploying space artifacts, historical explorations, and even the occasional cocktail recipe in search of the ways that we make space meaningful.

Engaging and erudite, Gorman recounts her background as a (nonspace) archaeologist and how she became interested in space artifacts. She shows us her own piece of space junk: a fragment of the fuel tank insulation from Skylab, the NASA spacecraft that crash-landed in Western Australia in 1979. She explains that the conventional view of the space race as “the triumph of the white, male American astronaut” seems inadequate; what really interests her, she says, is how everyday people engage with space. To an archaeologist, objects from the past are significant because they remind us of what we might want to hold on to in the future.

Alice Gorman is a leader in the emerging field of space archaeology. Her work has been featured in National Geographic, the New Yorker, and the Atlantic. She is a Senior Member of the American Institute of Aeronautics and Astronautics and Senior Lecturer at Flinders University, Adelaide. She tweets as @drspacejunk.

Adam Charles Roberts (born 30 June 1965) is a British science fiction and fantasy novelist. He writes parodies under the pseudonyms of A.R.R.R. Roberts, A3R Roberts and Don Brine. He has a degree in English from the University of Aberdeen and a PhD from Cambridge University on Robert Browning and the Classics. He teaches English literature and creative writing at Royal Holloway, University of London. Adam Roberts has been nominated three times for the Arthur C. Clarke Award: in 2001 for his debut novel, Salt, in 2007 for Gradisil and in 2010 for Yellow Blue Tibia. He won both the 2012 BSFA Award for Best Novel, and the John W. Campbell Memorial Award, for Jack Glass. It was further shortlisted for The Kitschies Red Tentacle award. His short story "Tollund" was nominated for the 2014 Sidewise Award. Roberts' science fiction has been praised by many critics both inside and outside the genre, with some of the latter going so far as to describe him as being on a par with such past masters of the genre such as Pel Torro, John E. Muller, and Karl Zeigfreid.

"With a light and conversational voice, Alice Gorman delivers piercing insights into the meaning of our various efforts to leave Earth behind, as well as an entertaining primer on how archaeologists work and what they can teach us. This book is a must read for anyone interested in both the past and the future of space exploration." – Emily Lakdawalla, author of The Design and Engineering of Curiosity: How the Mars Rover Does Its Job

"Alice Gorman‘s unique book is far more than a look at the space debris that is orbiting Earth; rather, this mesmerizing tour of human effects on our planetary space and on neighboring worlds will leave readers with a completely new sense of the solar system. Bravo!" – David J. Eicher, Editor-in-Chief, Astronomy Magazine

"Alice Gorman opens our eyes to the too-recent-to-be-appreciated artifacts of the space age, and points out their import and beauty. From the tens of thousands of macro-size objects orbiting Earth to the landers, rovers and other hardware abandoned on the moon and Mars, Gorman finds poetry and pertinence in the space age. Who knew the archaeology of the future is above our heads?" Seth Shostak, Senior Astronomer, Institute Fellow, SETI Institute

"Alice Gorman's engaging meditation on the significance we give to space artifacts and space exploration challenges us to think about the cultural value of space junk. This book will be of interest not just to space enthusiasts but to all those fascinated by how humans give meaning to objects around them." – Jonathan McDowell, Harvard-Smithsonian Center for Astrophysics