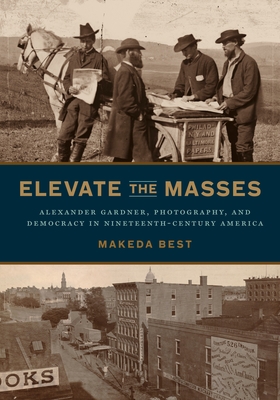 By Makeda Best
$87.68
We can usually get this book in 3 to 5 days, except during a pandemic. We are doing our best

Alexander Gardner is best known for his innovative photographic history of the Civil War. What is less known is the extent to which he was involved in the international workers' rights movement. Tying Gardner's photographic storytelling to his transatlantic reform activities, this book expands our understanding of Gardner's career and the work of his studio in Washington, DC, by situating his photographic production within the era's discourse on social and political reform.

Drawing on previously unknown primary sources and original close readings, Makeda Best reveals how Gardner's activism in Scotland and photography in the United States shared an ideological foundation. She reads his Photographic Sketch Book of the War as a politically motivated project, rooted in Gardner's Chartist and Owenite beliefs, and illuminates how its treatment of slavery is primarily concerned with the harm that the institution posed to the United States' reputation as a model democracy. Best shows how, in his portraiture, Gardner celebrated Northern labor communities and elevated white immigrant workers, despite the industrialization that degraded them. She concludes with a discussion of Gardner's promotion of an American national infrastructure in which photographers and photography played an integral role.

Original and compelling, this reconsideration of Gardner's work expands the contribution of Civil War photography beyond the immediate narrative of the war to comprehend its relation to the vigorous international debates about democracy, industrialization, and the rights of citizens. Scholars working at the intersection of photography, cultural history, and social reform in the nineteenth century on both sides of the Atlantic will find Best's work invaluable to their own research.