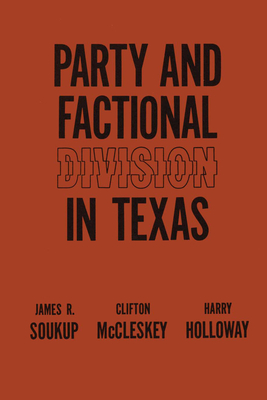 Here is the first attempt by scholars to make a comprehensive analysis of voting patterns in Texas. Examining the results of fourteen elections from 1946 through 1962 and organizing a vast fund of statistics relative to Texas political parties and voters, the authors have laid a solid groundwork for further studies in this field.

The previously ineffectual Texas Republican Party made great strides in the twentieth century and became a competitor in state as well as national races. Specifically, the authors maintain that Texas in the 1960s was a “one and two-thirds party state.” Within the Democratic Party, factions analogous to warring camps immensely complicated the political struggle. Although the conservative elements within the Democratic Party still had a slight edge, growing liberal strength forced them to moderate their policies and tactics.

The authors also contend that there were significant changes in the nature of the issues and the modes of political operation. Though some of the old motivations and tactics lingered on in less significant rural areas, friendship-oriented campaigns appealing to regional and family-like sentiments were being quickly replaced by an organized politics in which political activists made strong ideological appeals to economic and social interests.

The Republicans, the conservative Democrats, and the liberal Democrats are each analyzed in relation to regionalism, demography, ethnic elements, and the economic system in Texas; and the history, present status, and future prospects of these factions are discussed in detail. Of special interest are the last two chapters, which analyze the 1962 elections and their bearings on evolving patterns of competition. The developments within the Republican Party and its challenge to the traditional Democratic Party are seen in the perspectives of the growing importance of minority groups and the impact of urbanization.

All those interested in Texas politics and the history of the rise of the Republican Party in the state will find this study indispensable for an intelligent appraisal of historical developments.

James R. Soukup taught government at the University of Texas at Austin.

Clifton McCleskey is Professor Emeritus of American Politics at the University of Virginia.

Harry Holloway is Professor Emeritus of Political Science at the University of Oklahoma.