Siberia: A History of the People (Hardcover) 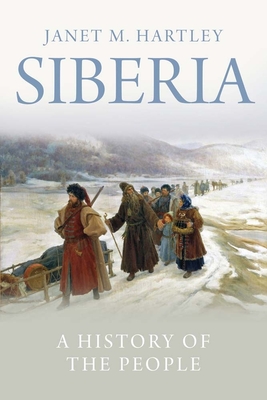 Siberia: A History of the People (Hardcover)


This book has been declared out of stock indefinitely, so we are unlikely to be able to get it.
Larger in area than the United States and Europe combined, Siberia is a land of extremes, not merely in terms of climate and expanse, but in the many kinds of lives its population has led over the course of four centuries. Janet M. Hartley explores the history of this vast Russian wasteland—whose very name is a common euphemism for remote bleakness and exile—through the lives of the people who settled there, either willingly, desperately, or as prisoners condemned to exile or forced labor in mines or the gulag.

From the Cossack adventurers’ first incursions into “Sibir” in the late sixteenth century to the exiled criminals and political prisoners of the Soviet era to present-day impoverished Russians and entrepreneurs seeking opportunities in the oil-rich north, Hartley’s comprehensive history offers a vibrant, profoundly human account of Siberia’s development. One of the world’s most inhospitable regions is humanized through personal narratives and colorful case studies as ordinary—and extraordinary—everyday life in “the nothingness” is presented in rich and fascinating detail.
Janet M. Hartley is professor of international history at the London School of Economics and Political Science.
‘In this excellent book, Janet M Hartley. . . elegantly captures the essence of a place of extremes by describing its people, both the settlers and the settled, the free and the unfree. . .Hartley’s beautifully chosen and told compendium of life stories down the centuries illuminates a region where, today, Asiatic faces are as numerous as Slavic ones, and believers are as likely to be Buddhist or shamanic as Christian — a place that’s still more full of human extremes than pretty much anywhere else, and all of them brought about by Russian rule.’—Vanora Bennett, The Sunday Times
— Vanora Bennett

‘In settling us there, Hartley gives us a history of Russia from the perspective that most immediately captures a foreigner’s imagination.’—Tom Payne, The Daily Telegraph
— Tom Payne

'In her masterful study of Siberia's people...Hartley's skill lies in her ability to make historical events vivid and accessible.'—Will Nicoll, The Spectator
— Will Nicoll

'In this vivid, carefully researched and authoritative work, Janet Hartley blends overall survey with individual case studies – many drawn from local archives – to throw light on Siberia as a part of Russia, yet also as a distinct region with its own marked characteristics. It should become the standard work on its subject.' - Geoffrey Hosking, author of Russia and the Russians: From the Earliest Times to the Present
— Geoffrey Hosking

"Hartley brings an established social historian's sensibilities, style, and scholarly approach to Siberian history. While she does a deal with major political developments, she does not attempt to tell the reader everything about Siberian history."—Helen Hundley, Wichita State University
— Helen Hundley