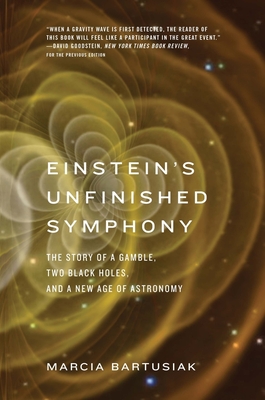 By Marcia Bartusiak
$18.90
Backordered. There will likely be a delay in getting this book

In February 2016, astronomers announced that they had verified the last remaining prediction of Einstein’s general theory of relativity—vibrations in space-time, called gravitational waves. Humanity can now tune in to a cosmic orchestra. We have heard the chirp of two black holes dancing toward a violent union. We will hear the cymbal crashes from exploding stars, the periodic drumbeats from swiftly rotating pulsars, and maybe even the echoes from the Big Bang itself.

Marcia Bartusiak was one of the first to report on the new generation of observatories, showing the motivations of the detectors’ creators and the gamble they made to prove Einstein right when all other attempts had failed. She traces the quest of astronomers to build the Laser Interferometer Gravitational-Wave Observatory (LIGO) detectors, the most accurate measuring devices humans have created, and the discovery of gravitational waves, revealing the brilliance, personalities, and luck required to start a new age of astronomy.

Marcia Bartusiak is professor of the practice, graduate program in science writing, Massachusetts Institute of Technology, and the award‑winning author of six previous books, including most recently Black Hole: How an Idea Abandoned by Newtonians, Hated by Einstein, and Gambled on by Hawking Became Loved.

"When a gravity wave is first detected, the reader of this book will feel like a participant in the great event."—David Goodstein, New York Times Book Review for the previous edition, a Notable Book for 2000

“If aliens came to Earth to measure our level of advancement, we could do no better than to show them LIGO, Earth’s first gravitational wave observatory, and to hand them a copy of this book to explain how we did it.”—Adam Riess, Nobel Laureate in Physics, 2011

“Bartusiak provides a fascinating description of how the LIGO Scientific Collaboration first observed the gravitational waves from the merger of two black holes. The observation is the first step in a new field of gravitational wave astronomy, and this book shows readers the evolution of that field from a new idea in 1915 to a measurement in 2015.”—Rai Weiss, Massachusetts Institute of Technology

"This book gives a splendid account of a century-long saga that culminated in spectacular confirmation of Einstein's theory. Bartusiak's account is fascinating--and a remarkable 'case study' in how science advances."—Sir Martin Rees, author of Just Six Numbers