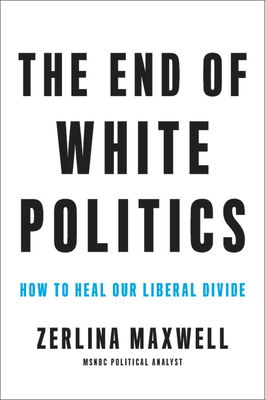 An MSNBC political analyst and former Hillary Clinton staffer examines the past and present problems of the Left—and makes a compelling case for how to take back our government and secure a better future for America.

In the entire history of the United States of America, we've never elected a woman as our president. And we've only had one president who was not a white man.

After working on two presidential campaigns (for Barack Obama and Hillary Clinton), MSNBC political analyst and SiriusXM host Zerlina Maxwell gained first-hand knowledge of everything liberals have been doing right over the past few elections-and everything they are still doing wrong. Ultimately, these errors worked in President Donald Trump's favor in 2016; he effectively ran a campaign on white identity politics, successfully tapping into white male angst and resistance. In 2020, after the Democratic Party's most historically diverse pool of presidential candidates finally dwindled down to Joe Biden, once again an older white man, Maxwell has posed the ultimate question: what now, liberals?

Fueled by Maxwell's trademark wit and candor, The End of White Politics dismantles the past and present problems of the Left, challenging everyone from scrappy, young "Bernie Bros" to seasoned power players in the "Billionaire Boys' Club." No topic is taboo; whether tackling the white privilege that enabled Mayor Pete Buttigieg's presidential run, the controversial #HashtagActivism of the Millennial generation, the massive individual donations that sway politicians toward maintaining the status quo of income inequality, or the lingering racism that debilitated some Democratic presidential contenders and cut their promising campaigns short, Maxwell pulls no punches in her fierce critique. However, underlying all of these individual issues, Maxwell argues that it's the "liberal-minded" party's struggle to engage women and communities of color-and its preoccupation with catering to the white, male working class—that threatens to be its most lethal shortfall.

The times—and the demographics—are changing, and in order for progressive politics to prevail, we must acknowledge our shortcomings, take ownership of our flaws, and do everything in our power to level the playing field for all Americans. The End of White Politics shows exactly how and why progressives can lean into identity politics, empowering marginalized groups, and uniting under a common vision that will benefit us all.

Zerlina Maxwell is an MSNBC political analyst, commentator, speaker, and writer. She is also the Senior Director of Progressive Programming for SiriusXM and the cohost of the award-winning radio show, Signal Boost.

“Along with bringing #BlackGirlMagic to our screens on Peacock TV, Zerlina Maxwell breaks down everything wrong with our current political system and how to center true equity as progressives navigate the political landscape.”—EBONY

"[This] book aims to confront the inherent whiteness at the heart of
America's politics on both sides of the aisle... [it is] so
current and immediate and gripping that reading it feels like someone let
Maxwell peek at summer 2020's headlines before she sat down to write it."—Glamour

"With a style that is as infectious as it is cogent and accessible, the author outlines and defends her recommendations and strategies so thoroughly that the only possible dissent is a willful disregard for the future of not just the Democratic Party, but the future of all but the most privileged Americans."—Kirkus, Starred Review

"Maxwell has produced a worthwhile blueprint for a
party that seems to have lost its way."—Booklist

"[This book shows exactly how] uniting under a common vision... will benefit us all."—New Books Network

"As an analysis of the current state of America's political system, The End of White Politics - How to Heal Our Liberal Divide is an important book that reads like the future, like an awakening, like common sense. Written with passion and commitment, Zerlina Maxwell presents her argument persuasively and unapologetically, and with enough anecdotes to lift it above the political thesis."—Manhattan Book Review

"In her classic truth-telling, no-holds-barred style,
Zerlina flips the 'identity politics' debate on its head, laying out why
Democrats should reject the notion that it's a politics of social division, and
instead embrace it as a bridge to social cohesion and inclusion. The book
underscores a powerful truth: centering the voices and experiences of those too
long marginalized in our politics--including women of color and particularly
black women--will not only strengthen our democracy, it will win elections."—Maya L. Harris, civil rights advocate, former seniorpolicy advisor to Hillary Clinton, and author of Women of Color: A GrowingForce in the American Electorate

“... An imperative read for our times. Arguing we need to lean into identity politics, Maxwell explains what we need to do—now—to move the Democratic party, and the nation, forward. “
—Ms. Magazine

“A clear-eyed critique of the racism and sexism corroding American politics.”—The Atlantic