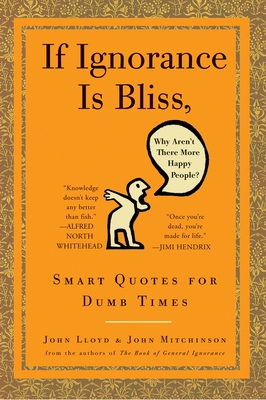 John Lloyd and John Mitchinson have proven themselves to be masters at digging up obscure facts, abstruse information, and amusing anecdotes and presenting them effortlessly, somewhat slyly, with either great wit or at least a little bit of tongue in cheek. Their gifts are on full display in Quote Interesting, a lively, wonderfully enjoyable anthology of hundreds of quotes you probably have never heard before, arranged thematically from A to Z. From laugh-out-loud-funny bon mots to some real headscratchers, Lloyd and Mitchinson have gathered a universe of star-studded blurbs like:

“The Beatles are dying in the wrong order.” —Victor Lewis Smith
“When you forget to eat, you know you’re alive.” —Henry James

“I think people would be alive today if there were a death penalty.” —Nancy Reagan

“You know ‘that look’ women get when they want sex? Me neither.” —Steve Martin

JOHN LLOYD is the producer of the hit British comedy shows Not the Nine O’Clock News, Blackadder, and Spitting Image. He recently earned a lifetime achievement award from the British Academy of Film and Television Arts (BAFTA). JOHN MITCHINSON is a writer, and, with Lloyd, a producer for the British television show QI. They both drink at the same pub.