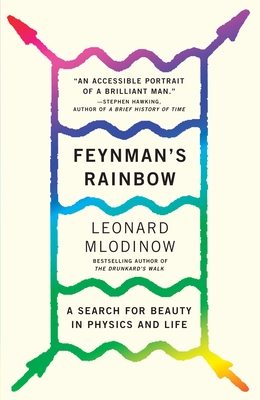 By Leonard Mlodinow
$16.00
We can usually get this book in 3 to 5 days, except during a pandemic. We are doing our best

Some of the brightest minds in science have passed through the halls of the California Institute of Technology. In the early 1980s, Leonard Mlodinow joined their ranks to begin a postdoctoral fellowship. Afraid he was not smart enough to be there, despite his groundbreaking Ph.D. thesis, he took his insecurities to Richard Feynman, Caltech’s intimidating resident genius and iconoclast. So began a pivotal year in a young man’s life. Though a series of fascinating exchanges, Mlodinow and Feynman delve into the nature of science, creativity, love mathematics, happiness, God, art, pleasures and ambition, producing a moving portrait of a friendship and an affecting account of Feynman’s final creative years.

LEONARD MLODINOW received his Ph.D. in theoretical physics from the University of California, Berkeley, was an Alexander von Humboldt Fellow at the Max Planck Institute, and was on the faculty of the California Institute of Technology. His previous books include the best sellers Subliminal  (winner of the PEN/E. O. Wilson Award), War of the Worldviews (with Deepak Chopra), The Grand Design(with Stephen Hawking), and The Drunkard’s Walk: How Randomness Rules Our Lives (a New York Times Notable Book), as well as Euclid’s Window. He also wrote for the television series MacGyver and Star Trek: The Next Generation.

“An accessible portrait of a brilliant man.” —Stephen Hawking, author of A Brief History of Time

“A very unusual memoir of a very unusual author’s revealing encounters with a very human legend.” —The Dallas Morning News

“This is a sweetly entertaining book about the weird, but engaging, world of physics. . . . Young scientists will find solace and perhaps inspiration here.” —American Scientist

“Mlodinow’s tribute to the man is set against an amusing, nicely drawn backdrop of campus life, and fleshed out with a very readable account of string theory, which developed into the most promising breakthrough of the century in theoretical physics.” —The Independent (London)

“Mlodinow’s accessible style manages to convey Feynman’s cantankerous appeal as well as some of the weirdness of theoretical physics without overtaxing lay readers, while his deft, funny, novelistic portraits of its practitioners . . . bring this seemingly gray sub-culture to vivid life.” —Publishers Weekly

“An exhilarating book . . . one that reflects the radiance of its subject and so warms as it instructs.” —David Berlinski, author of One, Two, Three: Absolutely Elementary Mathematics

“Mlodinow thinks in equations but explains in anecdote, simile, and occasional bursts of neon. . . . The results are mind-bending.” —Fortune