Waking up Just in Time: A Therapist Shows How to Use the Twelve Steps Approach to Life's Ups and Downs (Paperback) 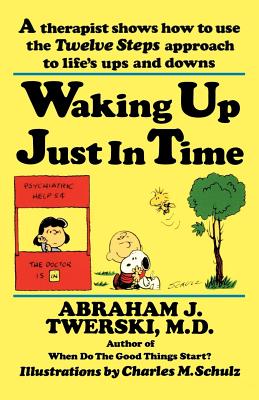 Waking up Just in Time: A Therapist Shows How to Use the Twelve Steps Approach to Life's Ups and Downs (Paperback)

Waking up Just in Time
A gentle and practical guide to the Twelve Steps way of life. Learn to:
Set Priorities and Manage Stress
Repace rationalization with honesty
Overcome obsession and triumph over failure
Explore the personal nature of spirituality

Alcoholics Anonymous has made famous its twelve steps to sobriety. In Waking Up Just in Time, Dr. Abraham J. Twerski shows how you can use the twelve steps to cope with any of life's difficulties, from dishonesty and intolerance of others to substance abuse. Dr. Twerski leads the way through AA's twelve steps toward a happier, more fulfilling life.

A few years ago, Dr. Twerski found that the Peanuts comics of Charles M. Shulz were helpful in his work with psychiatric patients. The humorous words and pictures in Peanuts gave patient and doctor a common ground for talking. Now Dr. Twerski again calls on Charlie Brown, Snoopy, and friends to help illustrate his points in their own inimitable way.

Dr. Abraham J. Twerski is a psychiatrist, an ordained rabbi, and founder and medical director of Gateway Rehabilitation Center in Pennsylvania. His books include When Do the Good Things Start? and Waking Up Just in Time, both inspired by Charles M. Schulz’s Peanut comic strips; and Life’s Too Short!, The Thin You Within You, and I'd Like To Call For Help But I Don't Know the Number.

Charles M. Schulz created the Peanuts comic strip in 1950. Since then, he has earned two Reuben Awards, six Emmys, two Peabodys, and the love of fans all over the world.