The Noodle Maker: A Novel (Paperback) 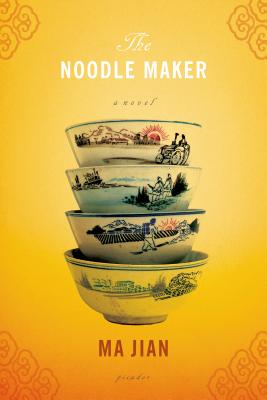 The Noodle Maker: A Novel (Paperback)

From Mi Jian, the highly acclaimed Chinese dissident, comes a satirical novel about the absurdities of life in a post-Tiananmen China.

Two men meet for dinner each week. Over the course of one of these drunken evenings, the writer recounts the stories he would write, had he the courage: a young man buys an old kiln and opens a private crematorium, delighting in his ability to harass the corpses of police officers and Party secretaries, while swooning to banned Western music; a heartbroken actress performs a public suicide by stepping into the jaws of a wild tiger, watched nonchalantly by her ex-lover. Extraordinary characters inspire him, their lives pulled and pummeled by fate and politics, as if they are balls of dough in the hands of an all-powerful noodle maker.

Ma Jian's satirical masterpiece allows us a humorous, yet profound, glimpse of those struggling to survive under a system that dictates their every move.

Ma Jian was born in Qingdao, China, in 1953. He worked as a watch-mender’s apprentice, a painter of propaganda boards, and a photojournalist. At the age of thirty, he left his job and traveled for three years across China. In 1987 he completed Stick Out Your Tongue, which prompted the Chinese government to ban his future work. Ma Jian left Beijing for Hong Kong in 1987 as a dissident, but he continued to travel to China, and he supported the pro-democracy activists in Tiananmen Square in 1989. After the handover of Hong Kong he moved to Germany and then London, where he now lives.

“One of the most important and courageous voices in Chinese literature.” —Gao Xingjian, winner of the 2000 Nobel Prize for Literature

“A superb comedian . . . this antic nihilist is hard to beat.” —Los Angeles Times

“Milan Kundera with a laugh track . . . One writer especially unafraid to flip off the Old Guard [and] still too punk to be found on Chinese bookshelves, even today.” —Nerve.com